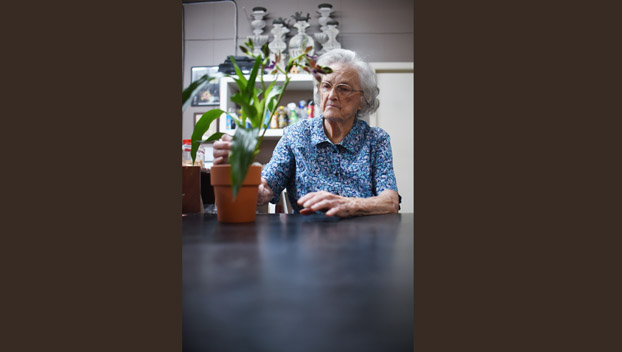 Anna Mae Freeman is still working as a florist at age 90 and has no plans of stopping anytime soon. (Nicole Hester, The Natchez Democrat)

NATCHEZ — A Natchez woman’s floral career is still blooming at the age of 90, and she has no plans of stopping anytime soon.

Anna Mae Freeman has spent her life working in the floral business, and her most recent stint started two years ago when she joined the staff of Nest, 505 Franklin St., Natchez, after her previous employer, Mo’s Flower and Gifts on John R. Junkin Drive, closed.

“I told John (her boss, John Grady Burns) that I was not quite ready to stay home,” Freeman said of her decision to apply for the part-time job at Nest.

Burns, who owns Nest, said he was more than happy to bring Freeman on board.

“I really enjoy having her around,” Burns said. “She adds a wonderful spirit. She is helpful, and she is a true worker. She is always asking me what she should do next.”

The relationship is beyond employer and employee as Freeman and Burns have been close family friends for many years.

“I halfway raised him, and he went to school with my boys,” Freeman said, “Sometimes John calls me ‘Momma Freeman’ because I have known him his whole life.”

Freeman said her favorite aspect of her job is wedding work because that’s when she gets to put her florist skills to use.

“I do the corsages, the boutonnieres, the bride’s bouquets,” Freeman said.

Freeman has lived in Natchez her whole life and has been adding her touch to bouquets and arrangements for decades throughout the city.

She said her green thumb runs in her family, a family rooted in the gardening industry, as her grandfather, Chris Maier, was a landscaper from Ireland and eventually settled in Natchez and opened Chris Maier Florist and Nursery with Freeman’s father, William J. Maier.

“When I would come home from school we would work in the shop,” Freeman said, “I would sit on the floor and wire flowers to help my mama and daddy.”

After her grandfather died, Freeman said her father and her brothers continued the business for a number of years.

Freeman and her husband, Hugh Freeman Sr. Franklin County ran the business for a brief period while her brother served in the military during World War II.

Despite her family’s deep history with the flower business, Freeman said she did not always want to be in the industry.

“I wanted to be an interior decorator, but then a man offered me a good salary to work at his flower shop,” Freeman said, “I changed my mind and continued with the flower business.”

And although Freeman is often working, when she’s not working Freeman said she spends her free time enjoying her family and going to church at St. Mary Basilica.

Freeman has three children, Hugh Freeman Jr. of Vicksburg, Ronny Freeman of Madison, and Sandra Dunn of Natchez, as well as four grandchildren and 10 great-grandchildren.

Freeman said she values her faith and often prays for good health and a long life.

Also, Freeman said she likes to garden at home, with many of her plants being perennials, begonias and geraniums, as well as potted plants damaged at the Nest that she nurses back to health.

With a long life of hard work, Freeman’s advice for those starting out their careers or trying to find their passion is to stay focused.

“If you want success, you have to be dedicated and stay with it through good times and bad times,” Freeman said.

NATCHEZ — On the night of Nov. 5, Adams County Sheriff’s Office deputies responded to a report of a suspected... read more