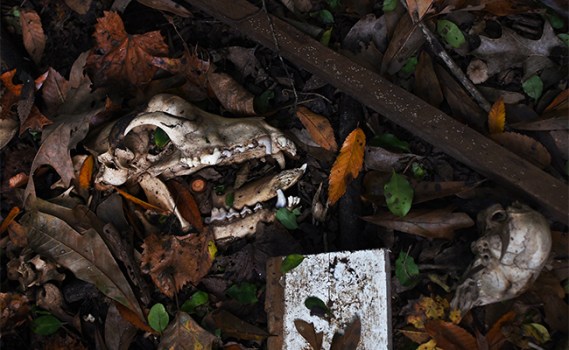 A bone yard of dead dogs was found on Tommie Queen's property on Nov. 5, 2017, in one of the worst cases of animal abuse in Adams County history. (Nicole Hester, The Natchez Democrat) 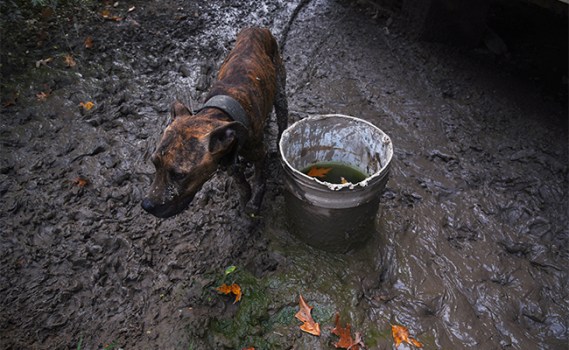 One of the dogs found on Tommie Queen’s property Nov. 7, 2017, in the Cranfield community was covered in mud, missing the front left paw and chained to a trailer. (Nicole Hester, The Natchez Democrat)

NATCHEZ — On the night of Nov. 5, Adams County Sheriff’s Office deputies responded to a report of a suspected dogfighting operation on Miracle Road in the Cranfield community.

Upon arrival, deputies found no humans on the 2 acres at 29 1/2 Miracle Road, but they found approximately 50 dogs in poor condition, some missing lower jaws and having legs bitten off, some chained throughout the woods and a bone yard.

“They didn’t have the decency to bury the dogs,” Adams County Sheriff Travis Patten said at the time. “It’s obvious what’s going on out here.”

The owner of the property, Tommie Queen, was eventually arrested and charged with 50 felony dogfighting counts after more than 50 injured and starving dogs were found, nine of which had to be euthanized, Patten said.

Queen remains free as the case is still being investigated before it will be turned over to a grand jury, Patten said.

“Most felony cases such as this can take up to a year to be processed,” Patten said. “Queen is out of prison, but his case is waiting to be presented before the grand jury. …”

The benchmark case was a turning point for the entire state, Patten said.

“That was one of the worst cases that I’ve seen,” Patten said.

The case on Miracle Road was not the only bad dogfighting discovery from the Miss-Lou, but perhaps it was the worst, Patten said.

Partially in response to the publicity of the Miracle Road case, the Mississippi Legislature passed a bill June 30 aimed at stiffening penalties for dogfighting in an effort to reduce dogfighting in the state, and the resulting new law went in to effect July 1.

Not long after the incident on Miracle Road, Sen. Robert Dearing, D-Natchez, filed a bill advocating harsher punishment for dogfights in Mississippi.

“It all began with the big dogfight bust here in Adams County,” Dearing said. “Seeing the pictures was very disheartening. … I grew concerned and began looking into the laws that we had at the time. Our laws were some of the weakest in the country.”

Compared to other laws throughout the nation, Mississippi’s law seemed to be little more than a slap on the wrist, Dearing said.

“People were coming into our borders to set up dogfighting rings because our laws were the weakest,” Dearing said. “Hopefully, this law will discourage people from setting up more dogfighting rings, because they will be faced with felony charges. We’re still a little behind other states, but it’s a great start.”

The new law states that people who promote, stage or bet on dogfights, own a dog with intent to enter it into a fight or own dogfighting paraphernalia may face between one and five years in jail, and repeat offenders are punishable by fines of $5,000 to $10,000 or prison sentences of three to 10 years.

Dearing also added to the law a provision to prevent animals that are recovered from any future cases from suffering.

“If veterinarians that are taking care of these dogs feel that they need to be euthanized, they can do so without being penalized,” Dearing said.

Where the dogs are now

Patten said some of the dogs that were rescued from the Miracle Road incident were sent to the Humane Society while others were kept safe as evidence in the case.

Now, many of the dogs have been rehabilitated and transported to undisclosed shelters throughout the nation, and a few may have already been adopted, Patten said.

Lena McKnight, director of the Natchez-Adams County Humane Society, said she often receives animals — mostly pit bulls — that she suspects may have been in dogfights or simply abused.

“Some dogs come in with scars over their face,” McKnight said. “There is a culture of dogfighting in our area for dogs that are either pit bull or pit bull mix. … A lot of pits are very sweet, but a lot of dogfighters seek them out for their presence (or their tough-looking) image.”

McKnight said some dogs are left at the shelter in very poor condition, the worst being starvation.

“Starvation is possibly due to people just not taking care of their dogs,” McKnight said. “I’ve seen a lot of cases where people have left their animals behind, (perhaps during a vacation or a move). Some of them were chained up. If they’re not found then they die there.”

The new law is already in effect, but Queen will be tried under the old law unless any later incidents come up, Patten said, because the alleged offenses occurred before the new law took effect.

Patten said he believes the new law is having, and will have, a significant impact on the number of similar felonies in the state.

“Since the last bust, things have died down a lot,” Patten said. “As a result (of the Queen case), the state laws were changed. I’m glad that law was pushed forward so (offenders) would have harsher penalties. I’m glad people spoke up to the point that the laws were enhanced.”