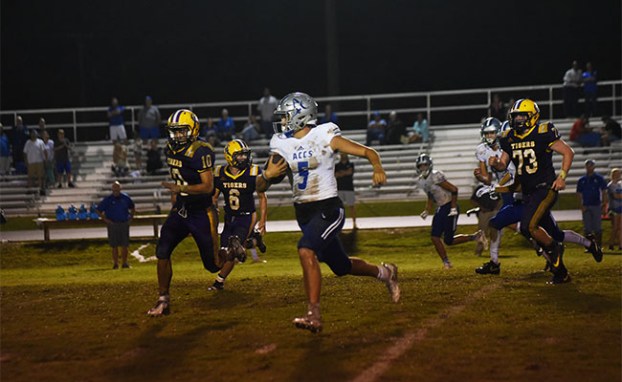 CENTREVILLE — Despite the consistent, and sometimes heavy, rain that fell throughout the Miss-Lou Friday afternoon, football Jamborees still took place.

But the inclement weather forced the Centerville jamboree to start about an hour later than the originally scheduled 7:30 p.m. start. In addition to host Centreville Academy, Adams County Christian School also participated in the jamboree.

In the first game involving MAIS Class AAA ACCS, the Rebels played to a 0-0 tie with the Class AAAA Parklane Academy Pioneers.

The nightcap of the jamboree went the way of the Rebels as they defeated the Centreville Academy Tigers 12-0. Jakarius Caston scored on a 49-yard run with 7:50 to go and Kemari Clark recovered a fumble and returned it 16 yards for a touchdown at the 7:18 mark.

Efforts to reach ACCS head coach David King for comments about his team’s performance in the Rebels’ two jamboree game were unsuccessful.

ACCS gets its season underway Friday when it hosts Central Hinds Academy at 7 p.m.

No information was available on Centreville Academy’s first jamboree game of the night against Parklane Academy, including a final score, was available. The Tigers play host to North Delta School to start their season next Friday at 7 p.m.

This jamboree consisted of two regulation quarters and, for the most part, head coach James Herrington was pleased with the team’s effort. Jaheime Herrington scored on a 3-yard run and Keldreon Smith added a two-point conversion reception for Jefferson County’s first points.

Zachary Ford scored on a 60-yard pass and catch from Gailrontae Fells, who scored on a two-point conversion run.

“We didn’t have any one player who stood out. We had a good team effort. Everyone played together,” coach Herrington said. “We minimized the mistakes. Didn’t have any turnovers.”

Herrington said he was most pleased with how the defense tackled on short-yard situations and the play of the offensive line.

“We tackled pretty well. We were able to keep them from picking up first downs in third-down situations. As the game moved on, our offensive line started to move people off the line,” Herrington said.

However, he also said that both the offensive and defensive lines will have to play better early in the game and not wait until after the first quarter to establish themselves.

Jefferson County starts its season at home next Friday when it hosts Magee High School at 7 p.m.

MEADVILLE — The Franklin County High School Bulldogs played host to MAIS Class AAAA powerhouse Madison-Ridgeland Academy Friday night in a jamboree, but the Patriots were not the least bit intimidated.

The game consisted of two regulation quarters and MRA dominated Franklin County from start to finish as the Patriots cruised to a 34-7 win over the Bulldogs.

“It went real bad,” Franklin County head coach Trey Woodard said. “We knew we were going to struggle some offensively, but not as bad as we did. We played hard.”

The Bulldogs’ only touchdown came on special teams as M.C. Covington scored on a punt return.

Woodard said the offense needs to get better with its ball security before the season starts next week.

“We’ve got to coach harder and practice hard and we’ll get better,” Woodard added.

Franklin County travels to Magnolia for its season-opener when it plays at South Pike High School at 7 p.m. Friday.

MCCOMB — One local team that was not able to participate in a jamboree was Natchez High School. The Bulldogs were scheduled to take on the McComb High School Tigers at the McComb Jamboree late Friday afternoon.

Inclement weather during the mid- to late-afternoon hours, however, forced the entire jamboree to be cancelled, Bulldogs head coach Roy Rigsby said. Natchez High will play host to Wilkinson County High School in the season-opener for both teams 7 p.m. Friday.

Mississippi River bridge: a look at work and reopening in Natchez

By Alex Rozier and Scott Hawkins NATCHEZ — En route to his daily workout in Vidalia a couple weekends ago,... read more