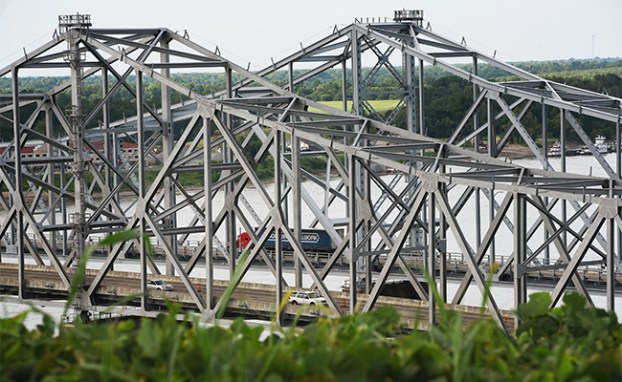 Mississippi River bridge: a look at work and reopening in Natchez

By Alex Rozier and Scott Hawkins

NATCHEZ — En route to his daily workout in Vidalia a couple weekends ago, Natchez Mayor Darryl Grennell met a pleasant surprise: the westbound section of the Mississippi River Bridge was open for traffic.

“I was totally shocked and happy,” Grennell said. “It was a wonderful, wonderful feeling to be able to go across that bridge again.”

For more than a year, the interstate Mississippi River Bridge (also called the Natchez-Vidalia Bridge) has been closed for repairs. But, as a welcome sign of progress for frustrated locals, one of the two westbound lanes opened on July 28.

“My position was: it was work that needed to be done,” Grennell said. “The period of inconvenience was a small sacrifice for citizens to pay in order to have something that’s going to be there for many, many years to come.”

The welcome news comes as state and local officials grapple with a statewide infrastructure crisis that has resulted in the closures of hundreds of small, local bridges and increased pressure on top legislative leaders to find new ways to fund infrastructure projects in Mississippi. Gov. Phil Bryant has indicated he might call a special session for lawmakers to consider creating a state lottery and using internet sales tax revenue to put towards roads and bridges.

If that happens, other bridges could join the Mississippi River Bridge in receiving needed repairs. Specifically, the bridge needed fresh paint, as well as new pins and links, critical structural components that hold together the bridge’s sections and allow it to flex, Department of Transportation public information officer Jas N Smith said. The pin-and-link replacement initially began in 2015 then stalled; work picked back up in July 2017.

“The bridge is very vital to our economy,” Vidalia Mayor Buz Craft said, “and to have both bridges open and have traffic moving as intended is great. The work was needed for the safety of our people. And to endure the little bit of pain we had to endure was worth it to ensure people are safe.”

Craft noted the bridge being reopened would be beneficial to two recently announced economic development projects in Vidalia — Syrah Technologies and Vidalia Denim.

“With all the things we’ve got going on economically,” Craft said, “to have those bridges open will be a boon to the economy.”

The nearly $27 million contract for the construction lasts until April 2019, but workers say they expect to finish the whole project this fall, Smith said.

“We’re a small town, but a very busy town, for tourism and other things,” said Rep. Robert Johnson, D-Natchez, who serves on the House Transportation Committee. “So we have a lot of traffic coming in and out. It’s extremely beneficial to have those bridges open.”

Both Johnson and Grennell said they had positive experiences working with the Department of Transportation during the construction. Grennell said he’s concerned about the status of the bridge’s decorative lights, which came down during the repair process.

“My only thing that I’m upset about, as it relates to the bridge, is that we had lights on the bridge that had been there for seven or eight years,” he said. “I will be meeting with members of the Mississippi Department of Transportation within the next couple weeks to see about the future of lighting our bridge in Natchez.”

No timetable is set for the lights to return, transportation officials said, until the cities of Natchez and Vidalia decide how to split the costs for the lights.  Decorative lighting installed on the bridge by MDOT in 2009 at a cost of $3 million was dismantled in the most recent construction project. MDOT officials determined reinstalling the lights was not economically feasible.

Both Craft and Grennell expressed interest in having decorative lighting reinstalled on the bridge and Grennell said he has meetings scheduled for this month to discuss options.

“Both cities, Vidalia and Natchez, worked to get the lights installed and Vidalia paid the electric bills,” Grennell said. “This is an opportunity to get LED lights on the bridge, and an opportunity to be creative with moving forward with LED to incorporate color lights with illumination.”

Grennell said higher technology lighting is now available that is more economically feasible and would allow options for special colors on certain celebrations such as red, white and blue for the Fourth of July or green for St. Patrick’s Day.

While Johnson, a former chairman of the House Transportation Committee, is pleased with the state’s response to Natchez’s infrastructure needs, and those of Adams County in general, he said other parts of his district haven’t received the same attention.

A $2 million frontage road that transportation officials claimed was unnecessary but was prioritized over other projects recently stirred controversy. The road, which several officials in the Jackson suburb of Flowood pushed for, would have connected the neighborhood where Lt. Gov. Tate Reeves lives with a local shopping center. Reeves has denied wrongdoing while Attorney General Jim Hood investigates the issue.

A Mississippi Today analysis also shows that legislators have made $163 million in special requests outside of the normal MDOT road-funding process. About half of those requests received funding, sometimes pushing other projects deemed necessary to enhance public safety lower on the list.

Johnson, who has been critical of the earmarks in the past, says state law should determine how projects are prioritized.

“Some of it has to do with traffic count and larger metropolitan areas sometimes leapfrogging you because they have more things going on,” Johnson said. “(Adams County has) had as accelerated of a response from the Department of Transportation as any small community. There are communities around the state that have more critical needs than we do. Ours are critical, but there are areas that are in worse shape, including in my district, like in Franklin and Jefferson County.

“(Franklin and Jefferson counties) have really been bumped by some of these larger projects. We’re going to continue to work on making sure there’s more equity in terms of how people’s projects are taken up, and that it has less involvement in terms of political power and political pressure from people who are in higher positions. That is a reality, that (leapfrogging projects) happens way more than it should.”

Repairs on the Mississippi River Bridge started in April 2017. The bridge has been closed since July of last year.

The oldest span of the bridge first opened in 1940 as a toll bridge. A second bridge (now the eastbound bridge) was built in 1988, allowing for two lanes in each direction.

Family gives back to St. Jude with fundraising dinner each year; this year it’s Sunday

NATCHEZ — One Natchez family benefitted so much from the St. Jude Children’s Research Hospital in Memphis 13 years ago... read more