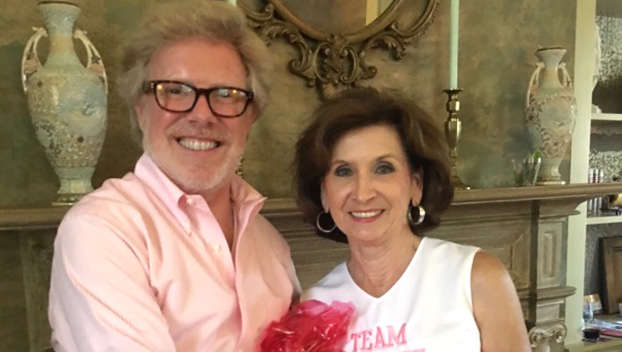 Team Natchez and the Natchez Festival of Music have partnered to raise money for the American Cancer Society. Dan Gibson, left, of Team Natchez holds a pink-wrapped gift basket he received as congratulations for the team’s fundraising efforts. Gibson gave the basket to Natchez Festival Music member Mary Lessley, right, as a thank you gift. The group plans future benefit concerts at Brandon Hall, Dunleith and Monmouth. (submitted)

NATCHEZ — Team Natchez started a fundraising race for the American Cancer Society at a full sprint by partnering with Natchez Festival of Music.

The partnership resulted in earning first place in round one of the “Real Men Wear Pink” contest to raise money to help combat breast cancer.

Soon after his nomination, Gibson said he met with Natchez Festival of Music members and many friends in the community to develop a creative way to raise money Natchez-style, thus the idea for “Concerts 4 the Cure” was born.

“I thought it would be really fun to get Natchez involved and show the other teams how (fundraising) is really done,” Gibson said.

In the true spirit of Natchez resident’s love for music and fun, Natchez Festival of Music members and community partners organized a series of four concerts for the fourth Sunday of the following four months. The series started July 22 at New Direction Ministries in Natchez and featured a gospel and soul performances from local talent.

Gibson said the kick-off event for the series dubbed “Concerts 4 the Cure” at New Direction Ministries was free. Through a love offering of $689 was collected that night and added to approximately $2,500 collected through donations before the event.

Gibson said he had no idea how well Team Natchez was doing in the race until the Jackson meeting when the ranks were announced.

Gibson received a gift basket in congratulations for Natchez’s progress, which he then gifted to the team cheerleader, Mary Lessley, who was unable to attend the Jackson meeting.

“Wow,” Lessley said. “Everyone has been so generous. … We had no idea that we’d be on top of the bracket, but Natchez has always been generous to these types of causes. … We hope people will continue to come out to our other concerts coming up.”

Of course, races do not stop after the first leg, and Jody Macon of Tower Loans in Flowood passed Team Natchez around the corner after the Jackson meeting.

Macon has since raised a total of $6,495 while Team Natchez follows in second place with $3,639. However, Gibson said he is not at all concerned about the loss of the lead.

“We’re not worried about that,” he said. “We have three concerts coming up, and we’ve had a good response to those and already sold a lot of tickets.”

Concerts 4 the Cure continues with an “All Classical Concert” at 4 p.m. on Aug. 26 at Brandon Hall, tickets are $50 per person.

Gibson said attendees can meet at Kings Tavern for an after party following the concert and enjoy a signature pink cocktail — a colorful salute to breast cancer awareness — while participating in a silent auction.

All event proceeds will support the American Cancer Society and the Team Natchez campaign. Gibson said most of the concert venues and refreshments also were donated to the cause.

Tickets can be purchased at The Nest, Natchez Coffee Co., Monmouth Historic Inn or online at teamnatchez.org. The teams’ progress can be tracked at realmenwearpink.org/centralms.