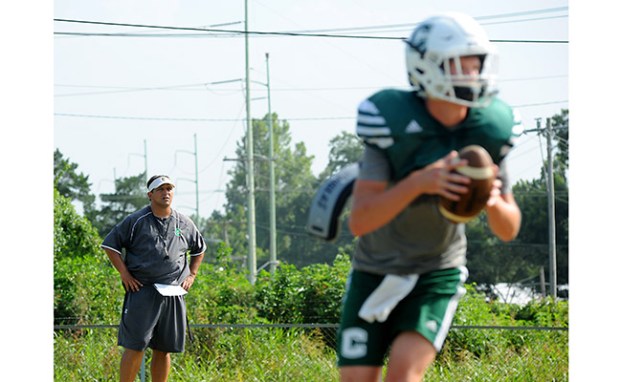 Touch of history: Cathedral coach finding stride with two years behind him

This year, things are much easier for Cathedral School’s Chuck Darbonne.

Not that things were difficult before, Darbonne said, but at least he’s got some history behind him now.

“I’m really just worried about building relationships with the kids that are here and building with what we’ve got,” he said. “It hasn’t been an overnight fix, but it is getting easier. Some of the everyday tasks are becoming a little more normal, I guess.”

Cathedral’s season opener will be against someone who has made plenty of Green Wave history of his own. Former Cathedral coach Ron Rushing brings his Brookhaven Academy Cougars to Natchez for a 7 p.m. kickoff Friday.

Since winning a state championship with the Green Wave in 2014, Rushing returns for the first time this season to his former school.

“We’ve faced them twice already in my first two years, but it’s the first time we’ve gotten to play them here,” Darbonne said. “They will have their game plan ready to stop the things we do, and we’ll have ours based on how successful he has been doing the things he’s done either here or there.”

Before and during the game, fans have the opportunity to pick up a little Cathedral history, too.

Copies will be sold at the school for $25, including at the game, while Irwin will be in Natchez Friday signing books. Twenty percent of the proceeds will be donated to the school.

A graduate of St. Aloysius, Irwin had already written historic books for St. Al and Clinton High School before taking on Cathedral, which he said took him about a year to complete.

“I just started researching newspapers and confirming things like the first year of football,” he said. “I visited the school about six or seven times and was going through all kinds of drawers and folders. I knew I had what I needed.”

Irwin said he is excited to finally meet some of the people he’s written about during this week’s game. Each book is complete with a forward by Judge Walt Brown, voice of the Cathedral Green Wave.

“The last time I was in D’Evereux Stadium, I was playing on the field in 1984,” Irwin said. “I’m looking forward to it.”

Though Irwin’s book ends before his tenure, Darbonne said he’s happy he’s not in the transition period anymore.

“A lot of it was just second guessing here or there moving from one regime to the next,” he said. “Not that there was anything malicious, but I just had to establish my own set of ideas.”

And as he continues to write his own history, Darbonne said he doesn’t plan on stopping any time soon.

“I absolutely love it here,” he said. “The kids play hard and give you everything they’ve got. You can’t change the athletic make-up of somebody, so all you can ask is that they play hard and they do.”

Adams County Chrsitian School will also host their season opener when it takes on Central Hinds Academy at 7 p.m. Friday.

The Rebels are coming off an 11-2 season after falling in the MAIS Class AAA semifinals.

Jefferson County will host Magee at 7 p.m. Friday for its season opener.

North Delta School will travel to Centreville Academy for a  7 p.m. kickoff Friday.

Vidalia will host Buckeye and LaSalle for a jamboree Friday night.

Franklin County High School travels to South Pike at 7 p.m. Friday in its first game of the season.

Baylee Graning did nothing special Tuesday night. She simply got on base. As her team’s leadoff hitter, Graning did her... read more