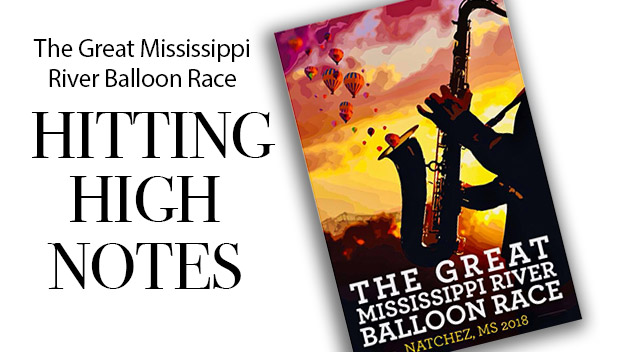 Jennie Guido and Kourtney Zimmerman’s design for this year’s Great Mississippi River Balloon Race poster and T-shirts is inspired by the music of New Orleans. This years balloon festival will be from Oct. 19-21 at the Bicentennial Gardens in downtown Natchez. (Submitted)

NATCHEZ — Don’t blame Jennie Guido and Kourtney Zimmerman if they appear to have their heads in the clouds.

The two local women have just been announced as the designers for the 2018 Great Mississippi River Balloon Race poster and T-shirts.

This year’s design created by Guido and Zimmerman features a flurry of hot-air balloons soaring out of a saxophone like notes drifting through the French Quarter on a lazy Saturday afternoon.

“We love it because we have a New Orleans thing going with this year’s festival,” Historic Natchez Foundation curator and balloon race pilot coordinator Nicole Harris said.

Harris said the poster is an ideal fit, because the festival is honoring New Orleans’ tricentennial celebration with a music lineup that is inspired by the sounds of the Crescent City.

Guido said when she first heard about this year’s focus on New Orleans her first thoughts turned to music.

“That is all I could think about. I envisioned a jazz player in New Orleans,” Guido said. “Instead of notes, I envisioned balloons coming out of the saxophone.”

Originally, Guido and Zimmerman were working on a balloon race advertising campaign for Country Roads Magazine when they decided to pitch the idea for the annual T-shirt and poster design.

Guido said she came up with the idea and Zimmerman, who is the magazine’s creative director, made the “pretty stuff happen” with the design.

Taking the idea of hot-air balloons drifting out of a saxophone, the creative duo added clouds, the Mississippi River Bridge and other elements that tied the design to Natchez.

“We made it look like something from Bicentennial Gardens at (the historic house) Rosalie,” Guido said.

Harris said the design has been positively received by those who have seen the artwork.

“Everybody who has seen it has said they like it,” Harris said. “They say it is different from all of the posters in the past.”

Harris said T-shirts and posters are not currently available for purchase but will be on sale closer to balloon race, which is set for Oct. 19-21.

Tickets to the festival can be purchased in advance at natchezballoonrace.com. Weekend passes are $35 for adults and $10 for children.

For a full schedule of the weekend’s festival go to natchezballoonrace.com.