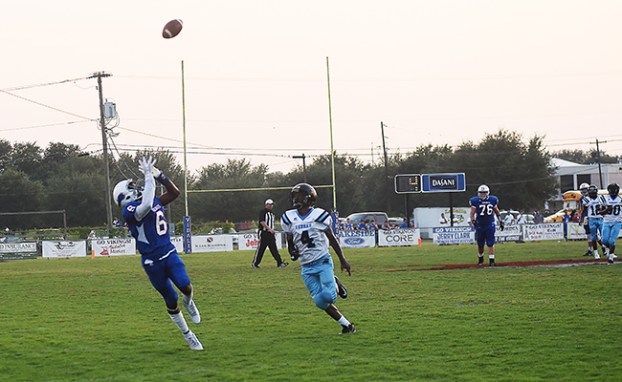 Vidalia Vikings see what they want in annual jamboree

The Vidalia High School Vikings saw exactly what they wanted Saturday night as they cruised to a 28-0 jamboree victory over Tensas.

But, offensive coordinator Mike Norris said he thinks the Vikings can see a little more.

“We saw exactly what we were expecting to see because we know we have some talent this year,” he said. “We missed a couple of assignments and reads, but we like this because we get to put it on tape.

Norris said he expects the improvement from Saturday to Week 1 to be quite measurable.

“After we put it on film, we can show the kids,” he said. “You can tell them all you want, but until they see it themselves they don’t believe you sometimes. It should help tremendously.”

Tristan Weatherly threw three touchdowns in the win. Jared Simpson caught two for scores of 12 and 24 yards. De’Vonte Loyd caught the other for a 9-yard score.

Dylan Troxler was a perfect 4-for-4 on extra points.

Vidalia’s defense was also effective as Jamar Lyons intercepted a pass and L.J. Jones has a scoop-and-score touchdown.

“I wanted to see hitting, and I saw hitting,” head coach Dee Faircloth said. “Defense really looked like it was supposed to.

“Of course we have some things we have to clean up, but overall we did a good job.”

The Vikings open play Friday at home for its annual game against Sicily Island.

Friday night felt like an eternity for some, but Natchez High School needed just two minutes to bring it to... read more