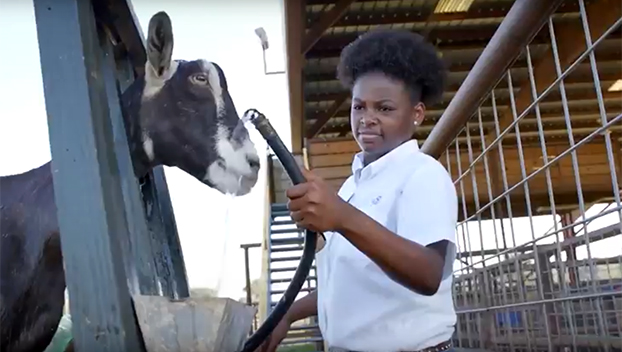 Robert Lewis Middle School student Peyton Bell is featured in a video by the Mississippi Extension Service about Bell and her showmanship with goats. (still from video)

NATCHEZ — Peyton Bell, a sixth-grade student at Robert Lewis Magnet School, has been a superstar at goat shows since 2016 — alongside many of the prize-winning goats that are under her care — but her passion for animals goes much deeper.

In July, Bell was featured in a video by the Mississippi State Extension Service as the shining example of what showmanship is all about.

Bell has many reasons to be utterly proud of the mountain of ribbons she has earned after studying her animals from the tip of their ears to the bottom of their hooves and learning to maneuver each one around the arena.

Bell mostly loves being around animals in general, she said.

“I love caring for (the goats’) babies and milking (their moms),” Bell said. “It’s just like milking a cow. … you have to make sure there is enough milk for the babies. … My favorite animal is a dolphin, but for a pet, I like cats, dogs or goats. I like baby goats (mostly).”

Bell said her grandfather raises all sorts of animals, including roosters, rabbits, horses and even a turkey, she said.

Bell said she has been in more shows and earned more ribbons than she can count, including first place in showmanship at the Mississippi Dairy Goat Association spring show in Raymond last year. Winning is not what is most important to her, she said.

“I enjoy meeting the people — the co-showers from around the state, the country and the world.”

Bell also excels in the classroom and is a member of the National Beta Club and SOAR, an intellectually gifted program offered by the Natchez-Adams School District.

“Peyton Bell is a lovely young lady with natural leadership skills,” Weeks said. “She is kind, energetic and task-oriented.”

Bell’s favorite subjects in school are math science and reading.

“Peyton is every math instructor’s dream,” said Eric Smith, Bell’s math teacher. “She has come into a brand new environment at Robert Lewis and taken the class by storm. She is a natural-born leader that often puts other students’ needs in front of her own. I can see her being whatever she chooses to be in life. I often wonder how could a sixth-grader be so confident and poised.”

Bell said she wants to attend the University of Mississippi like her uncle, Justin Bell.

She is deciding whether to become an environmental engineer, a marine biologist or a zoologist when she grows up, simply because she wants to change the world by doing what she loves, Bell said.

“I just want to help nature, the environment and animals,” Bell said. “I want to make a difference.”

Bell said she has learned a lot from being in goat shows, including to always shake the judge’s hand — whoever that judge may be.

“No matter what you do, always shake the judge’s hand whether your judge is your teacher or your mother,” Bell said. “Surround yourself with positive energy and not negative energy, and let negative energy motivate you … and keep a smile on your face.”

Bell is the daughter of Ashley Murray and Charoyd Bell, both of Natchez.

The Viewfinder: Cathedral senior learns to be leader on dance team

NATCHEZ — A Natchez teenager said dance has helped her soar to new heights. Trinity Miller, 17, said being on the... read more