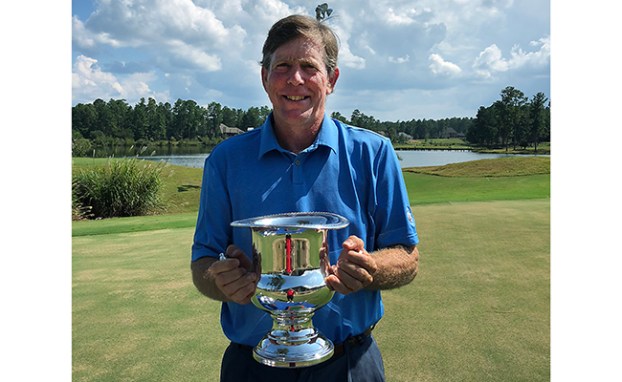 Greg Brooking waited 62 years for a moment he finally experienced this past weekend.

And to his delight, winning a Mississippi Super Senior Amateur State Championship was everything Brooking hoped for.

Squeaking by with a win by just one stroke, Brooking won his first state title Sunday at Timberton Golf Club in Hattiesburg.

Brooking becomes only the second golfer from Natchez to ever win a state championship, and he said it’s no wonder.

“It was a tough road,” he said. “These were all people I grew up playing golf with and it took me having a pretty good comeback to make it happen.”

Brooking trailed by four strokes going into Sunday’s third and final round. He was tied with six players four fourth place before shooting an outstanding round of 67 on Sunday for the win.

The tournament’s leader, Robert Willis, was the last to turn in his scorecard on Sunday and Brooking said he was too nervous to watch.

“I was out shooting practicing balls just in case we had to go to a playoff,” he said. “I would have been happy to just have a tie. I watched him walk up to the scoreboard and he just threw his hands up. I knew it had to be good.”

Brooking’s Sunday round of five under par was a gift, he said.

“I started the first hole with an eagle and then I just played steady golf all the way through,” he said. “I knew if I turned in a really good score, I’d have a good shot of winning. To win outright was amazing.”

With the win, Brooking earns an automatic spot on the 2019 Governor’s Cup Team. His next goal, he said, hopefully doesn’t take him another 62 years.

“You just have to keep going on,” Brooking said. “Maybe another state championship, or even a national championship.”