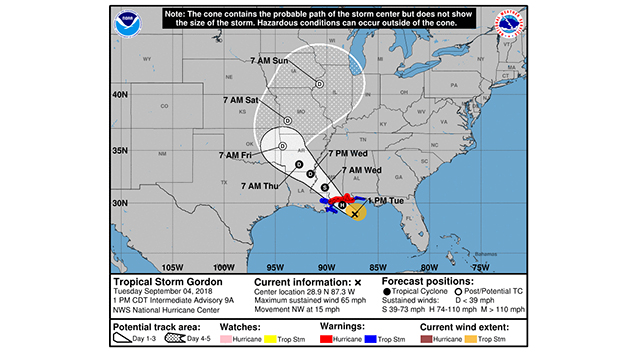 At 7 p.m. Tuesday, the National Hurricane Center in Miami said the core of Tropical Storm Gordon was approximately 75 miles southeast of Biloxi.

Forecasters said Gordon, after some strengthening late Tuesday, packed top sustained winds of 70 mph at 7 p.m. Tuesday. The storm was moving to the northwest toward the coast at 14 mph.

“The good thing is that we are forecast to be on the (weak) side of the storm,” Bradford said.

The current track from the National Hurricane Center predicts the storm will move to the north and east of the Natchez area.

The Adams County Board of Supervisors declared a state of emergency Tuesday in preparation for the storm.

The board voted unanimously to adopt a resolution proclaiming the state of emergency during Tuesday’s regularly scheduled meeting.

Gordon also is expected to bring up to 2 to 3 inches of rainfall to the area, Bradford said.

Other than downed power lines and tree limbs, Bradford said he is most concerned that the highest winds are projected to happen before area schools start in the morning.

Bradford said the Adams County Road Department plans to monitor road conditions throughout the storm to make sure roads are clear.

Bradford said the Adams County Safe Room opened at 6 p.m. Tuesday and will remain open throughout the storm for any potential evacuation needs, while the hospital prepares to receive any elderly or disabled persons receiving home health care.

“With that, we’re probably going to deal with limbs that fall and power outages in certain areas of the county and maybe the city,” he said.

Board president Calvin Butler said county residents should take precautions if they have not already done so.

“Stock up on water and food, make sure your generators are working and get batteries for your flood lights — things of that nature,” Butler said.

Entergy spokesperson Mara Hartman said the company’s crews are being dispersed throughout the state to areas they expect will be most affected by the storm.

“We have crews on their way down toward southwest Mississippi, coming from the northern part of the state and north metro Jackson and up in the delta,” Hartman said Tuesday morning. “Our guys know this storm is coming, and we also have alerted our contract crews.”

Southwest Mississippi Electric Power Association officials said in a news release that they are carefully monitoring the storm and that crews are ready to respond when necessary.

Natchez-Adams School District Public Relations Officer Tony Fields said the Natchez Early College Academy will not have classes Wednesday because the Natchez Co-Lin campus on which NECA operates will be closed.

All other NASD schools are still planning to be open Wednesday, Fields said.

The historic sites and administrative offices of Natchez National Historical Park will be closed to all public use today because of the storm.

The park’s historic sites and offices will remain closed through the duration of the storm. Once the storm passes, park employees will assess any damage to the park and provide updates on reopening to public use.

The closure includes park administrative offices at the Natchez Visitor Center, the Melrose estate, the William Johnson House and the Fort Rosalie site.

Please obey all posted closures. Even once the storm passes, safety threats may remain in the form of downed trees, damaged limbs and possible erosion impacts.

The City of Natchez as of Tuesday afternoon expected the visitor services portion of the Natchez Visitor Center to remain open.