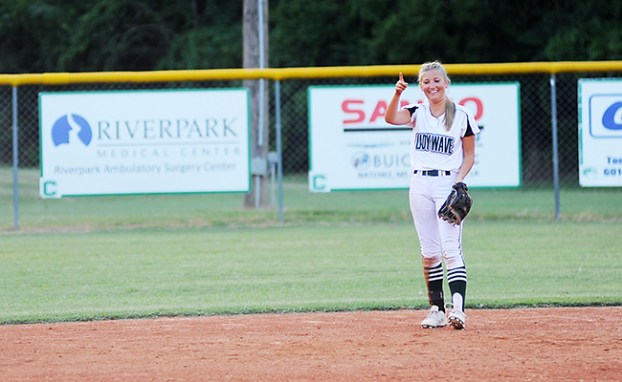 Cathedral School senior Baylee Graning salutes the crowd after making a diving catch at shortstop during a game earlier this season in Natchez. Graning has played shortstop her junior and senior year for the Lady Wave. (Emmalee Molay | The Natchez Democrat)

Finding her place: Lady Wave shortstop settling into role on team, in position

Cathedral School’s Baylee Graning has bounced around but is finally finding her place in her senior year.

Playing a handful of positions throughout her career, Graning has played shortstop for the Lady Green Wave for two years now.

“I had to move around a lot because of the older players,” she said. “I was always put where they needed me and I always felt pretty comfortable with any position, but shortstop has become my favorite.

“I used to hate it when I first started, but I feel really good about it now.”

Graning, one of three seniors for Cathedral this season, has helped lead the Lady Wave to a 8-5 record so far this season. After a win over Central Private Tuesday night, Cathedral stands with a perfect 4-0 mark in District 5-AAA.

Graning said she feels happy about her place on the field now because she knows it’s working out.

“Last year I needed to be better at it so I just practiced all the time,” she said. “Moving from third base to short was a totally different thing. The reads are different, and in the beginning it took a while to get used to it.

Despite the longstanding shuffle, Graning said there was one thing that stayed totally constant — her father Ward Graning.

“I grew up with softball and my dad helping out,” she said. “I’m his only kid, so his whole life has always been about me.

Graning added her and fellow seniors Mia Gamberi and Yani Rojo also have a special bond.

“We are so close. We are in all the sports together,” she said. “We’ve learned to grow and have a really good relationship. This year has been one of our closest years. We just have to keep it going. I want to make it the best we can.”

When she leaves, Graning said she has just one piece of advice.

“It’s weird to be leaving soon, but I want to tell them to always be a team,” she said, “never do stuff just for yourself.”

Editor’s note: The story published in Wednesday’s edition incorrectly identified Baylee Graning’s father. Her father is Ward Graning. The error has been corrected above. We regret the error and are glad to set the record straight.

The Cathedral Green Wave scored three touchdowns in a span of less than a minute and a half on its... read more