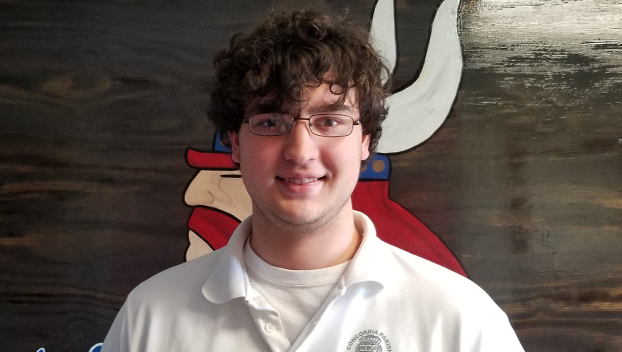 VIDALIA — Vidalia High School Student of the Year Sam Cooley has a passion for sports, writing and education.

Cooley, a senior at VHS, said teaching is in his genes, but his career choices are wide open.

Cooley said he hopes to dual-major in history and journalism at either Louisiana Tech University or Louisiana State University.

“I’ve always loved history, and I’ve always loved journalism,” Cooley said. “The two go pretty well together for any career choice I might want to pursue. I might try to become a professor or a politician, or something of that nature. Those two majors go well with those career paths.”

Cooley, the son of Bernie and Shannon Cooley, said he might like to teach on a college-level.

Cooley said his inspiration is his dad, who has always been an educator.

Bernie Cooley coached football and track in Pine Prairie, where Cooley attended elementary school, and is now the principal of Vidalia High School.

“He has always been a big figure in my life,” Cooley said. “He’s always been there in every single school that I’ve been in. … I think I’ve only been to one school where he wasn’t there, and he still helped me a lot.”

Last summer, Cooley worked as a freelance correspondent for The Natchez Democrat, and he still enjoys writing as the chief editor of Viking Publications, he said.

“I love writing,” Cooley said. “I really like writing about sports and every now and again I write about the clubs.”

Cooley is the founder of the school’s history and science clubs, the co-founder of the book club and is a member of the National Beta Club. He also worked as the football statistician for the Vidalia Vikings.

Natchez Boy Scouts of Troop 157 participate in a ceremony Monday afternoon to retire an American Flag outside of the Natchez... read more