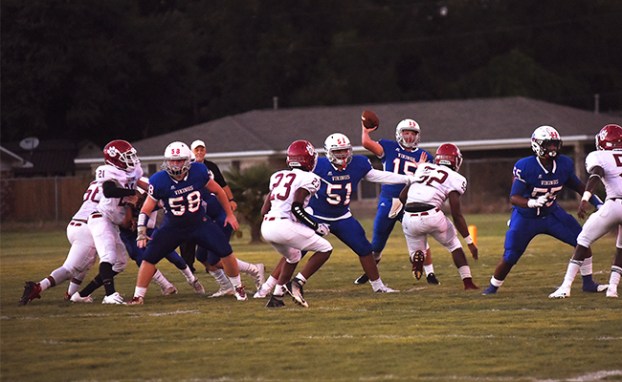 Vidalia Senior quarterback, Tristan Weatherly throws the ball during a game against Sicily Island earlier this season. Vidalia is looking for redemption this week after falling to Delhi last Friday. (Nicole Hester, The Natchez Democrat)

VIDALIA — The Vidalia High School Vikings will look to get back to their winning ways when they travel to Homer, Louisiana, to take on the Homer High School Pelicans at 7 p.m. today.

LHSAA Class 2A Vidalia goes into this match-up at 1-1 overall after a tough and high-scoring 40-27 loss at home to Delhi High School. Class 1A Homer is 2-0 overall after a 26-12 win at Beekman Charter School.

Vikings head coach Dee Faircloth said he is hoping for a better performance from the offense and the defense. He pointed to overthrown receivers, dropped passes, too many missed tackles and poor pass coverage as reasons for their loss to Delhi.

As for what concerns him the most about Homer, Faircloth said, “They’re mostly a running team. That’s been a different thing. They’ve got a bunch of athletes. They’re athletic, just like they were last year. So we better be ready to play. It’s going to be a long trip.”

Faircloth added that he didn’t like his defense giving up 40 points and his offense scoring 27 points to a Class 1A opponent — especially at home.

“We just need to be more consistent on offense. They came on better in the second half. But we’ve got to catch the ball and make the throws when people are open. We’ve just got to execute. That’s what we haven’t done,” Faircloth said.

Vidalia will need a big game from several players on both sides of the ball for the Vikings to pick up a big win with District 2-2A play set to begin next week.

“Offensively, our quarterback (Tristan Weatherly) and our running backs. Our offensive line has got to do our job. Defensively, we made some changes. We’ve got to swarm the ball like we’re capable of,” Faircloth said.

FERRIDAY — After a pair of heartbreaking road losses, the Ferriday High School Trojans will finally play their home opener at Melz Field when they take on the LaGrange High School Gators. Kickoff is set for 7 p.m.

Both teams will be seeking their first win of the 2018 season. Class 2A Ferriday is 0-2 after a 22-19 loss at Franklin Parish High School. LaGrange, which is in Class 5A, is also 0-2 after losing at home to Teurlings Catholic High School 29-12.

“We’re a young team right now. Execution and having that tenacity in the fourth quarter, especially on the road,” Trojans head coach Stanley Smith said. “You have to be focused. Distractions here and there took away from our focus,” Smith said.

When these two teams faced each other last year in Lake Charles, La., Ferriday escaped with a 14-13 victory.

“We’re have a sophomore at quarterback, Jyrin Milligan. He hasn’t had many reps. We lost our (starting) quarterback, Kobe Dillon, at the end of the first half of our first game at (Alexandria Senior High),” Smith said. “We lost our offensive line from last year. Trying to get on all cylinders right now.”

Despite not having won a game yet this season, there are several things about the Gators that concern Smith.

“Offensively, their quarterback is a sophomore who can run the ball. He throws the ball pretty well. They have a running back that can take it the distance on any play. Defensively, they have a scrappy bunch. They play with proper technique and they run to the ball,” Smith said.

Class 1A Delta Charter is 1-1 overall after a 27-0 win at Lincoln Preparatory School last Friday night after that game was called due to lightning late in the first quarter. Class 2A General Trass is 2-0 overall after shutting out Tensas High School on the road 40-0.

The visiting Tigers will be looking for big performances from Tyreke Tolliver, Keonte Dunbar and Tyrell, who attributed to all seven of Sicily Island’s touchdowns last Friday night.

JONESVILLE — The Block High School Bears will have their hands full today in searching for their first win of the season when they play host to the Jena High School Giants with kickoff set for 7 p.m.

NATCHEZ — All seven seniors for Adams County Christian School’s varsity softball team were in the starting lineup for the... read more