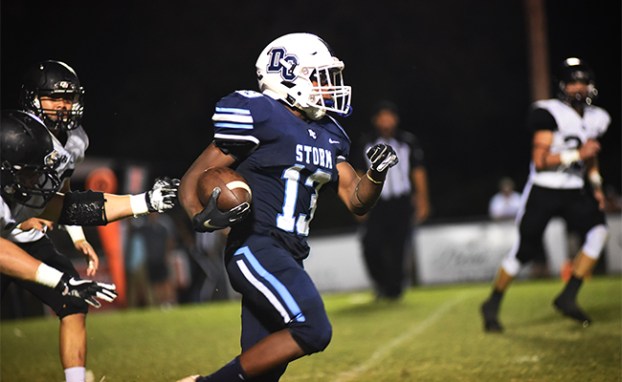 Delta Charter’s Tre Griffin runs the ball down the field during the game against Oak Grove on Friday night in Ferriday. (Nicole Hester, The Natchez Democrat)

FERRIDAY — Calling the game from the press box Friday night gave Delta Charter School head coach Blake Wheeler a different view of the game than from the sidelines.

And while Wheeler was pleased with how the offense performed against Oak Grove High School, the No. 6 team in the latest LSWA Class 1A poll, he was not thrilled with the defense giving up big plays and the special team allowing long returns.

The Tigers would eventually turn a close game into a blowout thanks to a 54-point second quarter as they defeated the Storm 68-31 in the LHSAA District 2-1A opener for both teams to remain undefeated.

“It was a hard-fought game. It was back and forth, back and forth,” Wheeler said. “In the end, Oak Grove’s physicality, their lines on both sides wore us down. They’ve been doing that for several years.”

“It was hard to stop them. We had several missed tackles,” Wheeler said. “We also gave up big returns in the kicking game. We’ve got to work on special teams.”

But being up 30 points at halftime on the road wasn’t good enough for the Tigers as they scored another touchdown in the third quarter just for good measure.

The two teams combined for exactly 1,000 yards of total offense. The Tigers had 540 total yards, with 436 coming on the ground. The Storm ended up with 460 total yards.

Despite losing by such a lopsided margin, Wheeler said the offense had its best showing of the year – and against an Oak Grove defense that held Sterlington, at the time the No. 2 team in Class 3A, to just 14 points a week earlier.

“We should’ve had 500 yards of offense. Trey (Poole) had 300 yards passing. Ka’varius (Whitehead) had 198 yards receiving. We had a back who had about 100 yards rushing. Rykeion (Glasper) had a good game. He high-pointed the ball over an All-State cornerback,” Wheeler said. “Tre Griffin got some key first downs and had some big runs.”

Poole completed 15 of 28 passes with three touchdowns, but he also threw two interceptions and had one rushing touchdown. Whitehead caught eight passes and had two TD receptions. Griffin finished with seven carries for 90 yards. Glasper had four catches for 78 yards and one touchdown.

And the Storm was doing this for much of the game without senior athlete/running back Freddie Mango, who left the game late in the first quarter with a leg injury and did not return.

NATCHEZ — Natchez Adams School District maintained a D letter grade from the 2017 to 2018 school year, according to... read more