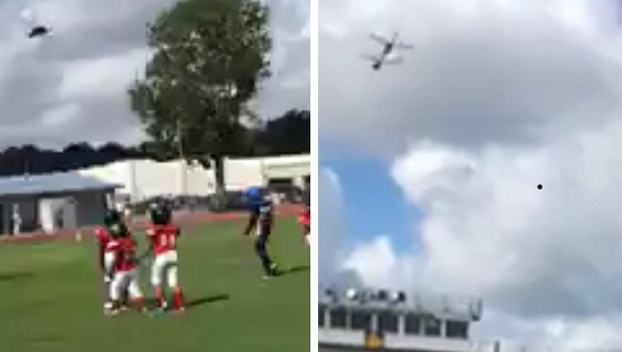 Robert Irving was there watching his son, Robert Jr., 7, play for the Falcons and he decided to shoot a live video for his social media page.

Irving recorded a few minutes and posted it to his social media page approximately 10:30 a.m., he said.

“Well, about 5 that evening, I went and re-watched it,” Irving said.

As he re-watched it, Irving said he noticed something no one at the game had noticed at the time — a couple of objects flying over the football field at a high rate of speed.

“You had no noise; no crowd reaction,” Irving said of the flying objects. “I slowed it down and took pictures (screen shots). It had four wings, two on each side. I couldn’t speculate on what it was.”

The first flying object streaks over the football field about 50 seconds into the 2-minute video and then a second object comes into view at the 1:20 mark, leaves the frame, and then zooms back across the sky above the football field.

Irving said he could not speculate on what the objects were. He did, however, stop the video and take screenshots of the objects that appear to be drones.

Darryl Smith who is involved in the youth programs was at Saturday’s games as he is many Saturdays with youth sports programs and said he did not see anything flying over the field. Smith said he is not aware of anyone flying remote control airplanes or drones in the area on Saturdays.

Natchez-Adams School District Superintendent Fred Butcher said he was not aware of anyone flying drones or remote control aircraft in the area and no one managing the football field on Saturdays was aware of any such activity, either.

“I didn’t want to tell too many people about it because it would look strange,” said Irving, who teaches high school classes at Ombudsman school in Natchez, “but I know who could tell me, The Natchez Democrat.”

Natchez Police Chief Walter Armstrong said he is not aware of any reports of people flying drones in the area Saturday or any time recently.

Brown said the sheriff’s office has a drone, and Brown has a Federal Aviation Administration license to operate the drone.

“It was not our drone,” Brown said of the flying objects seen in the video. “I have our drone with me.”

Brown said he is not aware of any reports of drone usage in the area, but drone technology has advance quickly for the private and hobby market and many people may not be aware of FAA regulations governing drone usage.

“There is a lot you cannot do with a drone (legally),” Brown said, of FAA regulations. “You cannot fly over a crowd.”

Brown said some hobby drone models can be flown more than 2 miles away from the person flying it, but the operator is required to have FAA certification and is supposed to have spotters on the ground to comply with FAA regulations.

NATCHEZ — Bridget Chappell is leaving her position as the city’s network administrator and IT director. She was awarded... read more