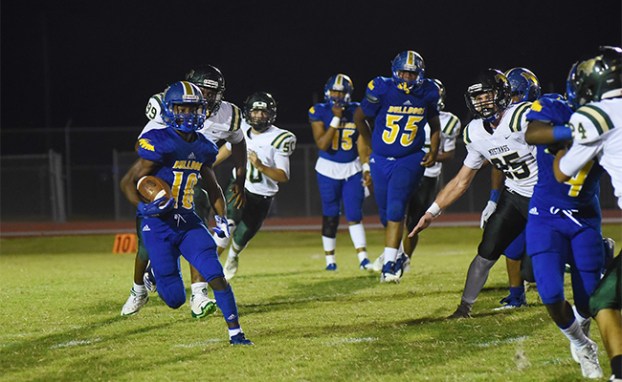 By D’VENNIO WARNER
The Natchez Democrat

Both the Bulldogs (4-2, 1-1) and West Jones (5-1, 2-0) entered the contest undefeated in district play, but the Bulldogs were unable to continue their winning ways. The Mustangs rolled to victory behind their front four on the defensive line.

“I understand that our front four is really good, and they’re having a hard time blocking them,” said Pierson Mustangs Head Coach Scott, emphasizing the strength of his defensive line.

The Mustangs were able to pressure Natchez senior quarterback Paul Hargrave of all four quarters, including three sacks and three interceptions.

“I said it earlier in the week, they have one of the best defensive lines I’ve seen,” said Natchez head coach Roy Rigsby. “We have to get better at blocking and special teams
going forward.”

Bad snaps on a pair of attempted punts by the Bulldogs ultimately led to two offensive possessions inside the 10-yard line for West Jones, both of which resulted in touchdowns for the Mustangs.

“Our offense and special teams put our defense in bad positions tonight,” Rigsby said. “I know the score was 35-0 and people may think they just came in and blew us out.”

The Bulldogs held West Jones scoreless the entire second half, but they were unable to score on the Mustang’s stingy defense.

“I thought the game would be a good game, but I think it was just a situation where the game got out of hand early and they had to play catch up. That’s hard to do with our defense,” Pierson said. “If you think about it, we had 35 points at half, but only 75 yards of total offense.”

Rigsby said he is proud of how his team played in the second half.

“I loved the fact those kids came out after halftime and continued to fight for us,” Rigsby said.

The Bulldogs defense held the Mustangs scoreless in the second half.

Richardson recorded a several tackles and had opportunities for sacks.

“Trent is going to be a dog,” Rigsby said. “It isn’t going to take long, he learns quickly, and hopefully by the end of this season or going into next season we will be talking about him being a starter for this team.”

Despite the loss, Natchez can still make the playoffs this season with a few more district wins this season.

“In order to beat South Jones we’re going to have to be disciplined from the defensive point of view when playing a team who runs the triple option,” Rigsby said. “It was a rough night tonight, we took it on the chin, and now we just have to bounce back.”

Natchez’s senior quarterback back under center

NATCHEZ — The Natchez High School Bulldogs will get their starting quarterback back on the field Friday night when they... read more