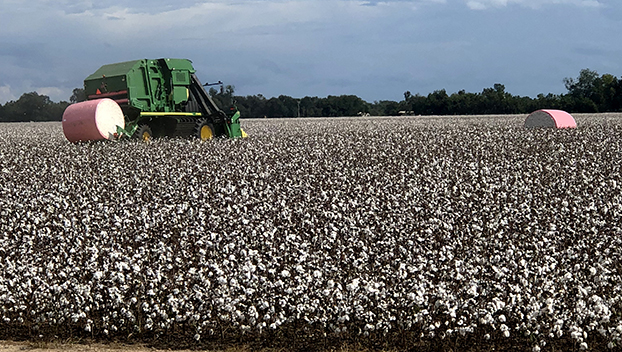 On Monday a cotton picker bails cotton on 1,600 acres of cotton crops in Concordia Parish. The land is farmed by the Ater family. (Photo by THomas Ater)

Natchez and surrounding areas were soaked Tuesday and Wednesday with a few hours of especially heavy rainfall. The National Weather Service recorded 3.44 inches over the two days with 1.45 inches coming between 11 a.m. and noon Wednesday.

Burns said Concordia Parish has approximately 8,000 acres of cotton planted this year and that approximately 40 percent of it was harvested before this week’s heavy rains. Burns said heavy rains can tear the cotton bolls from the plant and that they also affect the grade of the cotton by causing impurities, such as mold and discoloring the fibers.

Thomas Ater of Natchez helps farm more than 6,000 acres of family-owned farmland on the north side of Lake St. John in Concordia Parish. Approximately 1,600 acres of the farm is cotton, with the rest devoted to beans, corn and rice.

Ater said normal rainfall isn’t an issue, but this week’s rains were exceptional.

“It’s just like somebody turned over a bucket, and it all comes down in 10 minutes. That’s what really gets you, that and the lack of sunshine,” Ater said. “If it’s knocking the cotton out of the plant, there’s absolutely zero I can do about it once it’s on the ground.”

Ater said approximately 60 percent of his family’s cotton crops were picked before the rains. Of the 40 percent remaining, he said the bolls not knocked off the plant might be salvageable, but salvaging them would require enough sunshine to dry them before they become damaged.

“All in all it could have been a whole lot worse than what we ended up with. If you ask me again in a couple days,” Ater said, “if the sun doesn’t come out, I may be telling you a whole different story.”

Ater has worked the farm full-time since 2009. He said bad weather is to be expected and farmers have to prepare for the worst.

“You have to plan your whole year just being as tight and frugal as you can be because you don’t know when there’s going to be a hurricane or drought,” Ater said. “I plan my budget off a worst-case scenario, and if you can make that work the rest is lagniappe.”

ZEBULON, Ga. — Images of springtime in Natchez were in full bloom for four days in September in Zebulon, Georgia.... read more