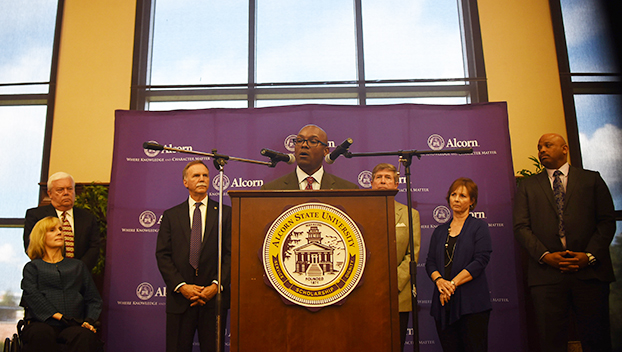 Shane Hooper, president of the College Board of Trustees, announces Alcorn’s decision to open a nationwide search for the new president of Alcorn Tuesday in Lorman. (Nicole Hester / The Natchez Democrat)

LORMAN (AP) — College Board trustees announced Tuesday that they will launch a broad search for a new president of Mississippi’s Alcorn State University.

“There was a consistent theme that we heard from all the constituent groups today, which is that they wanted to engage in a national search for a leader who met all the qualification they had in mind,” Shane Hooper, president of the trustees, told The Associated Press after a day of trustee listening sessions with campus groups at the 3,800-student university.

Hooper said that campus groups’ wish list for a new president include someone who relates well to students, understands the culture of historically black institutions including Alcorn, can raise donations and builds ties to the business community. The university is a land-grant institution with a focus on agriculture. The culture of its main campus is shaped by a location in an extremely rural corner of southwest Mississippi.

“They wanted someone who can build on the momentum Alcorn State University already has,” Hooper said.

The board will seek faculty, students, staff, alumni and community members to serve on a campus search advisory committee. Trustees say they will hire a search firm to guide finding the next president of Alcorn.

BY GENE COLEMAN VIDALIA — A hearing is expected by the end of next week into an incident in which... read more