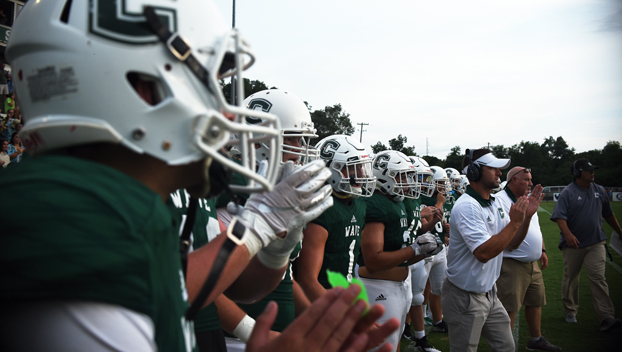 Cathedral football players cheer from the sidelines for their teammates during a game earlier this season. (Nicole Hester, The Natchez Democrat)

Cathedral hopes to even out to beat St. Aloysius

NATCHEZ — From one week to the next, Cathedral High School varsity football team’s performance has fluctuated, particularly in recent weeks.

Two weeks ago, the MAIS Class AAA Green Wave nearly shut out Class AAAA Copiah Academy at home 34-7. The Colonels did score a late touchdown to keep that from happening. Then just last Friday night, Cathedral was drubbed by Central Hinds Academy on the road 36-6.

In that game, Cathedral was held to just 129 yards of total offense. J.T. Taylor completed five of 17 passes for 46 yards with one touchdown pass to Lance Gaude and one interception. Tyriek Lee had 10 carries for 65 yards. And its defense gave up nearly 300 total yards and five rushing touchdowns to the Cougars.

“I thought we played hard. We didn’t execute at 100 percent,” Green Wave head coach Chuck Darbonne said. “We were in the game at halftime. Offensively, we didn’t do what we were supposed to do. Defensively, we got tired in the second half and gave up a few big plays that made the game get out of hand.”

Both sides of the ball will have to play much better if the Green Wave is to defeat longtime rival St. Aloysius in Cathedral’s homecoming game. Kickoff is set for 7 p.m. Friday.

“I would like to see the toughness that we had early in the game. Paying attention to detail offensively,” Darbonne said about what he would like to see from his players that he did not see last week at Central Hinds.. “Come out aggressive. And win the line of scrimmage on both sides of the ball.”

While Cathedral is 4-2 overall and St. Aloysius is 2-5 overall, the Flashes are playing their best football of the season despite losing at Central Holmes Christian School 28-14 last week.

“St. Al is a good team. Very good running back, receivers and quarterback,” Darbonne said. “They’ve been solid against good teams this year. They’ve made some big plays to keep them in games. Their strength is their offensive skill players.”

St. Aloysius has won two of its last three games after a dreadful 0-4 start to the 2018 season. And Cathedral, which escaped with a 32-27 win last year in Vicksburg, cannot take the Flashes lightly.

NATCHEZ — Coming off a hard-fought 14-13 road victory over Silliman Institute, the Adams County Christian School Rebels will hit the road again this week when they travel to Franklinton, La. to take on the surprising Bowling Green School Buccaneers.

Kickoff between ACCS and Bowling Green is set for 7 p.m. Friday. The win by the Rebels put them at 6-0 overall and 1-0 in MAIS District 5-AAA. Bowling Green is 6-1 overall after a 21-6 win at Central Private School.

While ACCS is picking up where it left off last year, albeit with a younger team under head coach David King, Bowling Green is a completely different team than what it was a year ago.

The Buccaneers were just 1-6 heading into their match-up with the Rebels in Natchez and ended up losing 38-7. They would finish that season at 1-9 overall and on an eight-game losing streak.

CENTREVILLE — Both Silliman Institute and Centreville Academy are coming off gut-wrenching one-point district-opening losses. Which means one team’s losing streak will continue while another will come to an end when the Tigers host the Wildcats at 7 p.m. Friday.

The Tigers are 3-4 overall and are on a two-game losing streak after they blew a 22-7 lead late in the third quarter and lost on the road to Brookhaven Academy 23-22 in their MAIS District 4-AAA opener on a late field goal.

A safety and a blocked extra point, both in the fourth quarter, hurt the Wildcats in their home loss to ACCS in the District 5-AAA opener for both team that dropped them to 3-4 overall.

Last year’s game in Clinton, La. was a close one with Centreville holding on for a 22-20 win over Silliman.

WOODVILLE — The Wilkinson County Christian Academy Rams will travel to Gulfport to take on the Christian Collegiate Academy Bulldogs Friday at 7 p.m. in the final game of their four-game road trip.

This is also a pivotal MAIS 8-Man Division 4 game for both teams. WCCA is coming off a 56-34 loss at Prentiss Christian School to fall to 3-3 overall and 1-1 in division play. In that game, the Rams gave up 469 rushing yards and seven rushing touchdowns. Four of those scores went at least 34 yards.

D’mario Weathersby accounted for 263 of the Rams’ 279 total yards of offense and five total touchdowns — four rushing and one passing. But their offense lost two fumbles and their defense did not force any turnovers nor any punts in their loss to the Saints.

Christian Collegiate Academy is 3-4 overall and 1-0 in division play, having won at Rebel Academy back on Aug. 31. The Bulldogs are coming off a 40-18 loss to Prairie View Academy and are on a three-game losing streak just after being on a three-game winning streak.

From the 1850s into the mid-20th century, white Southerners voted for the pro-slavery, pro-segregation Democratic Party almost without fail. Over... read more