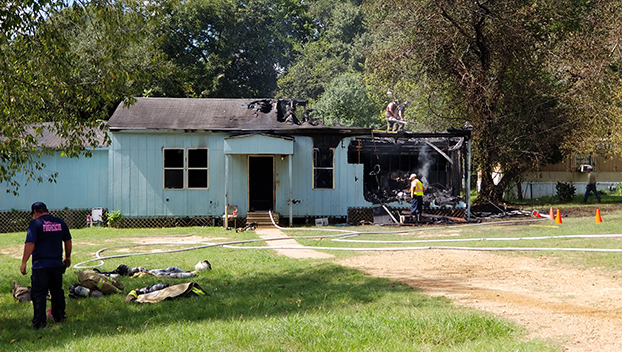 Firefighters put out hot spots as the scene of a house fire on Phillip West Road Thursday. (Sabrina Simms / The Natchez Democrat)

No one was injured during the 11 a.m. fire at a house at 10 Phillip West Road, off Steam Plant Road, north of Natchez.

The fire was mostly contained in one room on the north side of the structure, said Darryl Smith, the county fire coordinator.

“It’s still under investigation, but right now we’re looking at electrical causes based on what we heard from the resident who was inside,” Smith said.

Natchez Fire Department Capt. Bob Cain said the fire had broken through the roof and shattered two windows before the first truck arrived.

“The fire had already broken through,” Cain said. “It was vented out when they got here — they pretty much stopped it in place.”

Smith said other areas of the house received smoke, heat and water damage as firefighters worked to contain the blaze.