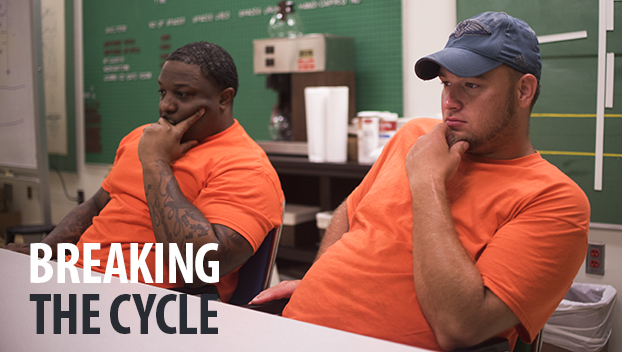 Work skills could be key to helping reduce repeat offenses

NATCHEZ — On any given day, the Adams County Jail houses 70 to 80 inmates, jail administrators say.

Some of the inmates are in for a short time on petty crimes; others are held awaiting trial, possible indictment or transfer to another facility.

Still others are serving their time in the facility from 60-to-90 days or up to a year or more for various infractions.

The inmates are incarcerated for various offenses, jail administrators say, and each inmate has his own circumstances that landed the person in jail.

Some of the inmates, jail officials say from experience, will wind up back in jail on later charges after release and many of the inmates agree economic circumstances led them to jail in the first place.

Adams County Sheriff Travis Patten said he has made it a priority of his administration to help inmates attempt to break the cycle of committing more offenses and winding up back in jail.

“Prison is supposed to have an aspect for rehabilitation, and it’s great they give them skills,” Patten said, “but once they are released, they are going to go back to petty crime. It’s best to help them get gainful employment to help them from going back to extreme measures to have a quality of life.”

Recently, Patten enlisted the help of Alcorn State University to help inmates take a job-readiness test to identify their competencies in order to make them more employable when they are released.

“They were doing that testing for the city high school and things like that,” Patten said, “so I asked Ruth Nichols if she ever thought about testing inmates, right after the second chance job fair.”

Nichols, who also serves as Adams County’s workforce development coordinator, was onboard and helped bring the test to the jail.

Nichols said the testing, administered by the Copiah-Lincoln Community College’s Natchez campus, to 11 inmates in the Adams County Jail recently, is the ACT WorkKeys Assessment that measures and certifies essential work skills needed for success in jobs across industries and occupations.

“This will open doors for inmates,” Nichols said, “and lower the rate of those coming back to jail.”

A report by the National Association of Counties titled “Second Chances, Safer Counties: Workforce Development & Reentry” found that “Reentry programs are an important part of counties’ strategies to keep communities safe and secure.”

“Counties operated 91 percent of all local jails in the United States, which admitted 11.4 million individuals in 2014,” the report states. “Jails also release more than 135,000 inmates each day. In addition, individuals released from federal and state prisons may turn to county social services for assistance upon returning home. Employment is one of the best ways to reintegrate formerly incarcerated individuals, as it reduces recidivism and allows them to contribute to their families and communities.”

Nichols said she helped train and prepare the inmates before the testing was administered.

Many employers require people to take the test and earn a National Career-Readiness Certificate before being hired, Patten said.

“The certificate goes with them when they leave the jail and shows their results and matches them to a job they are qualified for and ready to do,” Nichols said.

The test results grade individuals on four skill levels: Bronze, Silver, Gold and Platinum, Nichols said, and out of the 11 inmates who took the test, two earned gold, four earned silver, three earned bronze and two will need to retake the test.

Most of the inmates who took the test agreed they gained insight into their abilities from the test and were happy for the opportunity offered through the jail.

“I knew more than what I thought I knew,” said William White, who has been in the Adams County Jail for one year.

White said he learned through results of the test that he is skilled in “Graphic Literacy” that measures the ability to find, analyze and apply information presented in workplace graphics.

“It opens up that area for my employment, working inside of an office and doing other things,” said White, whose previous work experience has been in the field of mechanics.

White said the testing experience had encouraged him to explore more employment options when he is released.

Robert Henderson said he had some college training and he did well on the test.

“I actually already knew (what my strengths were),” Henderson said. “I was all straight except for my math skills.”

Henderson said his work experience has mostly been in the offshore oil business, and Henderson said he most appreciated the training he received from Nichols on people skills.

Fuller said he did well on the test.

“I feel like it opens more doors for me than the ACT or the GED and more avenues for employment,” said Fuller.

Austin Crawford said he was appreciative of the opportunity.

“It puts you in a general area for your abilities,” said Crawford.

Crawford said he learned about skills he has to help him find other avenues of employment in addition to his screen-printing and farming skills.

Capt. Tony Nichols, Adams County Jail administrator, said he is happy to see the testing program offered to the inmates.

“It was a great opportunity to allow the inmates to get better prepared for when they leave here,” Tony Nichols said, adding he believes inmates are more likely to fall back into crime if they do not have job skills and employment opportunities.

Tony Nichols said he was not surprised that some of the inmates did well on the test.

Patten said he would like to see the testing opportunities continue for county inmates.

“We always want people to come out better than they came in,” Patten said, “reduce recidivism and help them become productive members of society.

Patten said he also would like to offer a GED program in the jail as well as the ACT WorkKeys Assessment.

“It has become a requirement for certain companies to hire you,” Patten said, “… it is something I’d like to see continue.”

The next step, Patten said, is working to identify employers who would be willing to take on recently released inmates, and Patten said he is willing to vouch for inmates who have proven they have a good work ethic and a desire to reform, such as inmate Spanky Felter, who has served as trusty and works in the community.

Felter’s work ethic on a recent job, Patten said, caught the eye of an employer, and now he has a job lined up when he is released.

NATCHEZ —Jamionte Davis, who is charged with five counts of attempted murder, tops a list of the Adams County... read more