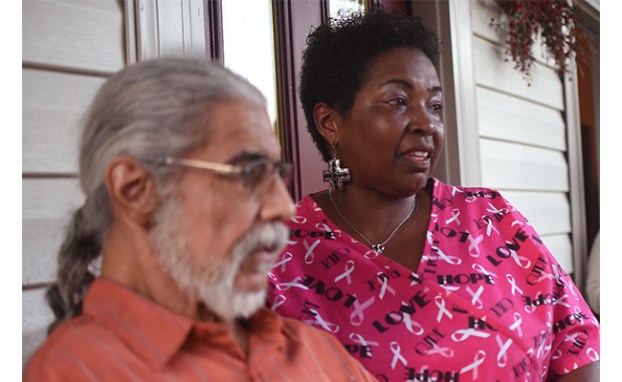 Velma Battieste stands Friday on her front porch in Natchez with her husband of over 40 years, Gene Battieste, and talks about how they met and the challenges the couple has overcome. (Nicole Hester, The Natchez Democrat)

NATCHEZ — Velma Battieste and her husband, Gene, have been together more than 40 years, and she said their marriage has withstood good times and bad times.

When The Dart landed near Battiestes’ house on North Wall Street on Friday evening, Velma was standing on her front porch worrying about Gene’s health, she said.

Gene, 66, is a Vietnam war veteran and a former employee of the International Paper Mill in Natchez for more than 30 years, Velma said, and he is now experiencing memory issues.

Velma said she and Gene first met when they were in their early 20s.

“We met at a convenience store, just outside of Natchez,” Velma said. “He came out to the car where I and my sister (Shirley Miller) were. … There were two sisters in one vehicle, so he couldn’t mess that up. … ‘Can I look you up later?’ he said. ‘I guess so,’ I said.”

Velma said it didn’t take long for Gene to look her up, either, and she recounted that day.

Velma and her sister were outside with their hair in big curlers while painting their nails with brightly colored nail polish and polka dots, Velma said, adding that is the way young people did their hair and nails back then.

“I saw his car coming and Shirley and I broke for the door to see who could hide faster,” Velma said, with a laugh. “I didn’t want him to see me in my curlers.”

Miller, who happened to stop by for a visit Friday, said she remembers that first meeting, too, and Velma and Gene have been together ever since.

“When they first met, that was a whirl-wind of a romance,” Miller said. “Over the years, they’ve had their ups and downs … but they’ve always done everything together.”

Velma and Gene have a son, Sidney Battieste Sr., who is now fully grown, Velma said.

Their grandson, Sidney Jr., is an eighth-grader at Robert Lewis Magnet School, and he moved in with his grandparents over the summer to help out around the house.

Velma said she has worked as a caregiver for more than 20 years, and Gene’s health has been in decline for months.

Doctors are still working to find out what is causing Gene’s health issues, Velma said.

“God puts us in different places,” Velma said. “Everything in this life happens for a purpose.”

NATCHEZ — Two men face charges in connection to a Saturday afternoon burglary that led to the discovery of 22... read more