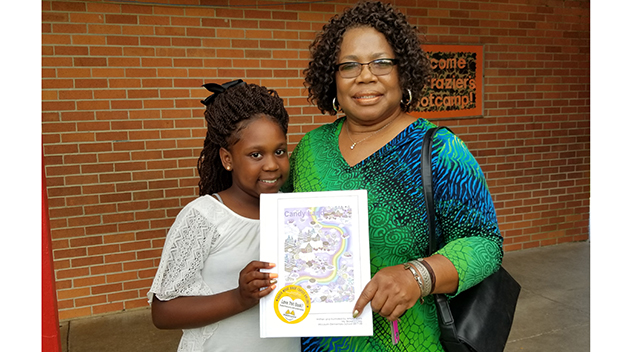 Frazier student Amure Harris holds a copy of her book with her great-grandmother Brenda Harris. (Sabrina Simms / The Natchez Democrat)

Last year at the age of 10, Harris wrote and illustrated her first book titled “Candy Land” as one of her fourth-grade assignments in SOAR, a gifted class she takes at Joseph L. Frazier Elementary School.

“I used my imagination to create a story,” she said. “I was just thinking about candy, and then it just clicked — ‘Candy Land.’”

The story is about her family living in a city of her imagination, where every day sugary sprinkles rain down from the sky. One day, a storm rains all kinds of candy, Harris said, and everyone gets sick from a stomachache after eating it all.

“I had to gather everyone up and drive them to the hospital in Veggie Land,” she said. “The mayor asked me if we could join our two lands together. … At first, I didn’t want to because when I came to Veggie Land I almost went to jail for eating a chocolate candy bar.”

In her story, Harris said, she decides life is better with both vegetables and candy, and everyone lives happily ever after with both.

Harris said she loved to draw and write before she ever did so for class.

“I like to draw different things like people and animals,” Harris said. “I tried to create my own book before. I stapled some papers together and tried to write in it. … Before this, I thought about writing a book, but I never thought I’d actually do it.”

Harris said reading and writing are her favorite subjects in school. She also likes to dance and sing and is a member of the student council, art club, drama club, Beta club and the “Showstoppers” music and dance team, she said.

Harris said she hopes to help people when they are sick when she grows up, just like she did in her story.

“I want to be a nurse … because I like helping people get better,” she said.

Harris is the daughter of Nkeemeha Harris and the great-granddaughter of Brenda Harris. She lives with her brother, Terry Harrington, and her triplet baby sisters, Isis, Isah and Ivy.

NATCHEZ — Two men face charges in connection to a Saturday burglary that led to the discovery of 22 stolen... read more