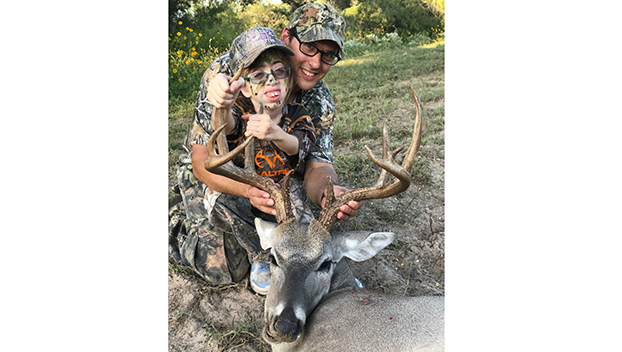 Janie Bertelsen and her dad, Craig, after Janie shot her first buck on a Buckmasters American Deer Foundation Life Hunt for children and young adults with critical illnesses or disabilities. (submitted)

NATCHEZ — Thirteen-year-old Janie Bertelsen may only be able walk short distances and stands a mere 4 feet tall, but she recently brought down a 138-pound buck.

Janie started a three-day hunting excursion at King Ranch in Encino, Texas, last Tuesday, during which she harvested the 11-point buck on her first day out.

“Janie put the crosshairs perfectly on the front shoulders of the deer and dropped it right on the spot,” said Janie’s father, Craig Bertelsen.

The hunt was made possible by Empowerment Outfitter Network, a hunting wish granting association created by Jerald Kopp for children who are either critically ill or who have severe disabilities.

“She had a blast,” Craig said. “The people there were just amazing.”

Janie has Marshall-Smith Syndrome, a rare genetic disorder that causes rapid bone aging and difficulty growing among other symptoms.

“The Marshall-Smith syndrome is a very infrequently described syndrome,” states the Marchall-Smith Syndrome website www.marshallsmith.org. “The syndrome has been described for the first time in 1971. Since then, about 50 children and adults with the syndrome are known in the medical literature worldwide.”

Janie’s mother, Leigh Anne Bertelsen, said Janie is incredibly social and active. However, her declining health has forced Janie to sit on the sidelines on many occasions, Leigh Ann said.

“As far as her physical capabilities go, Janie has gone downhill,” she said. “She walks very little now. It’s things like this … relationships with people, going to sporting events … that keep her going. She’s all about social interaction.”

Leigh Anne said Janie is the third oldest of seven children. Their family moved to Natchez from Tupelo three years ago.

Janie attends Vidalia Junior High School, where she has made an ample number of friends, Leigh Anne said.

“She picks a lot of boyfriends,” Leigh Anne said.

Stacey Roach, the grandmother of one of Janie’s boyfriends, Caden Poole, was ultimately the one who introduced Janie to a new world of fun through the Empowerment Outfitter program, Leigh Anne said.

She was fitted with a special piece of equipment that would allow her to control her gun with a joystick while a digital monitor showed a display of the scope, Craig said.

“Janie used to be able to walk and run around and now she’s confined to a walker with a seat on it,” Craig said. “In this case, she was the complete center of attention. She killed the deer completely by herself. She just needed to learn how to use the apparatus. … She was given a sense of confidence.”

Janie was also able to experience a unique wealth of wildlife on the million-acre ranch, Craig said, including nilgai antelope, wild hogs, horned owls and a rattlesnake more than 65 inches long.

Craig said the camp’s staff treated Janie as an esteemed guest and are sending her a shoulder mount trophy to remind her of her experience.

“They just wanted to give this week to Janie, who had never had this experience before,” Craig said. “She has giggled and talked about it non-stop.”

NATCHEZ — The Mississippi State Board of Education approved letter grades Thursday for the state’s school districts. The scores,... read more