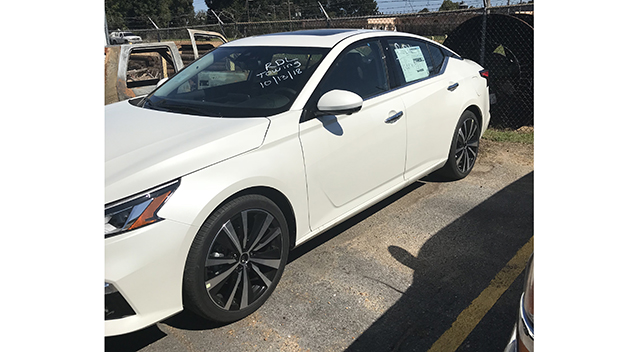 A juvenile stole this 2019 Nissan Altima and drove it for more than 100 miles, police say. (submitted)

NATCHEZ — A juvenile who will face a grand larceny charge in youth court could have ended up worse off after taking joy rides in a stolen car, police said.

Natchez Police Chief Walter Armstrong said a 17-year-old male, whose name was not released because he is a juvenile, was driving a white, 2019 Nissan Altima, Saturday afternoon when he was pulled over after he cut in front of Natchez Police Officer Cornelius Redden, causing Redden to slam on the brakes.

The driver had two other juveniles riding with him, Armstrong said, and further investigation revealed that Saturday afternoon was the driver’s second joyride of the day. Armstrong said that between the two rides, the youths put more than 100 miles on the estimated $33,000 new car.

Armstrong said the investigation also revealed that the juvenile’s mother was unaware of the stolen car because her son had parked the car down the street after taking it Friday approximately midnight from a Nissan car lot.

Armstrong said it appears the car was delivered to the Great River Nissan, likely on Friday afternoon, and left unsecured with keys inside.

Armstrong said that in this case the boy’s mother was not aware of what her son was doing.

“There was no indication that his mother knew anything about it,” Armstrong said. “It was secretly parked down the street from the house Friday night in order that they could get in the vehicle and start riding. Fortunately we were able to get this vehicle before an accident happened.”

Armstrong said the crime highlights a larger problem that both parents and the community should be diligent in reporting crime or suspicious activity.

“We need all hands on deck to make sure the youth of this community, not only teenagers but young adults, are held accountable for their actions,” Armstrong said and noted city ordinances require children under 18 years old to be off the streets by 10 p.m. on school nights and midnight on non school nights. “One way is making sure the curfews are adhered to, that children are off the street during school days at a specific time, 10 p.m. and midnight when school is not in session. It’s imperative that these rules be enforced by loved ones or guardians of these children and make sure they know where they are at all times.”