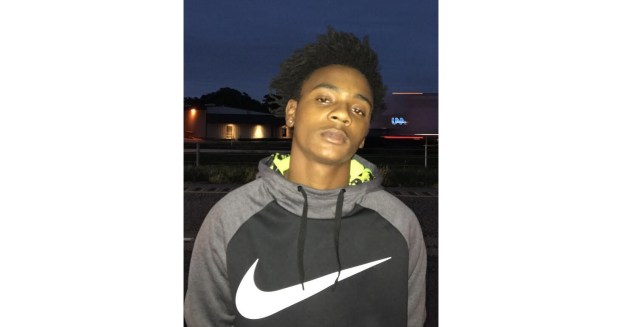 Jamontae Davis after he was apprehended Thursday in Burlington, Texas. (Submitted)

NATCHEZ — The suspect in an Aug. 29 shooting that occurred in the vicinity of Old Country Club Road in Adams County was taken into custody Thursday night in Burleson, Texas, Adams County Sheriff Travis Patten said.

Sheriff’s officials and U.S. Marshals had been searching for Jamionte Davis, 17, since he emerged as a suspect shortly after the Aug. 29 shooting.

Patten said Davis was a passenger in a car that was stopped in Burlington, Texas, Thursday for not having a tag. Davis did not have an ID and gave a false name, Patten said, so the officer investigated a bit and contacted Capt. Scott Frye of the Natchez Police Department.

“Together, we were able to provide the identifiers those officers needed to detain him on the charges that we have pending on him,” Patten said. “He only faces misdemeanors out there so the authorities will be turning him over to us as soon as a waiver of extradition is signed.”

Patten said Davis is scheduled to appear in court in Burleson on Monday morning. The sheriff said he expects Davis to be extradited back to Adams County to face charges of five counts of attempted murder.

The charges stem from the Aug. 29 shooting in which a car reportedly pulled up next to a car being driven by a woman who had four children in the back seat.

The car’s driver began shooting into the woman’s vehicle, officials said, and the woman was shot in the bicep and was able to driver herself to Natchez Fire Station No. 3. She was then transported for medical treatment for the non-life-threatening gunshot wound.

“I appreciate the citizens here giving us info and tips on where this guy was,” Patten said. “I also thank the guys out in Texas who didn’t just write a ticket but investigated more and discovered someone who is wanted for five counts of attempted murder. I thank the sheriff’s deputies and police officers in Burlington who did a fine job.”