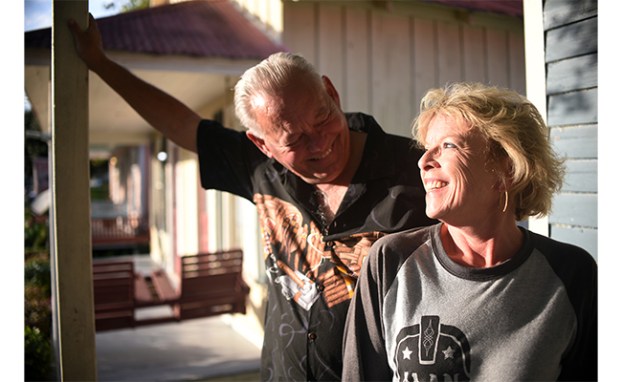 James “JB” and Georgeanna Brandt talk about their marriage on the stage of the New Orleans Jazz and Heritage Festival. (Ben Hillyer / The Natchez Democrat)

The Dart: Louisiana couple says ‘I do’ to Great Mississippi River Balloon Race

NATCHEZ — The music stage has been part of James “JB” and Georgeanna Brandt’s marriage since the day they said, “I do.”

When The Dart landed on Madison Street Friday, the Brandt’s were just settling in after arriving from Gretna, La.,  preparing to enjoy the Great Mississippi River Balloon Race festivities, particularly the jazz and blues music on the festival grounds at Rosalie, they said.

Georgeanna said she was set on coming to the festival for the first time when she heard Irma Thomas would be performing live Saturday.

James said they’ve heard Thomas play many times at festivals before where they are from and they were looking forward to seeing her in Natchez.

“She plays out in New Orleans a lot,” James said, “She is awesome.”

The couple said they have always been music fans, so the New Orleans theme at balloon race fit their fancy perfectly.

Georgeanna said she and her husband were even married on the stage of the New Orleans Jazz and Heritage Festival on May 6, 2000, where they have seen stars such Tom Petty and Elton John.

“We got married in front of about thirty people that we knew and about 2,000 total strangers,” she said. “The funniest wedding I’ve ever been to was my own.”

The humor was initiated by the crowd’s frustration, James said, as the usually quick transition between band sets was briefly halted by a disorganized preacher who officiated their wedding.

“Usually the bands change acts in about 20 minutes,” he said, “but it took the preacher 20 minutes just to get ready.”

Georgeanna said the preacher was missing at first. Then they found him trying to find his robe. Then he couldn’t find his Bible. Their impatience grew, she said.

“Finally, he gets to the part where he says ‘Do you — but he doesn’t remember JB’s name,” Georgeanna said.

James put his mouth close to the microphone and shouted “My name is James,” and the whole crowd of people in the tent at the festival roared, Georgeanna said.

“From that point on, everyone was cracked up,” she said, laughing.

The Brandts said they remember their special day year after year.

“My best friend said to me, “You should get married somewhere you’d like to return to, and we go to the jazz festival every year,” Georgeanna said.

Weather goes from drizzle to sunshine for balloon festival