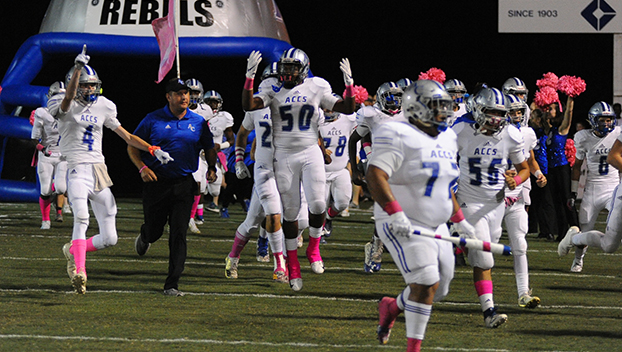 The Adams County Christian Rebels will be ready to take the field Friday night to compete against Bowling Green for the second time in three weeks. (Ben Hillyer / The Natchez Democrat)

Twice would be nice: ACCS faces Bowling Green in playoffs for second time in a month

NATCHEZ — Now that Adams County Christian School’s varsity football team is in the MAIS Class AAA State Playoffs, the No. 14 seed Rebels can focus on their first-round opponent — No. 3 seed Bowling Green School.

ACCS enters the playoffs with a 2-7 overall record and finished 2-1 in District 5-AAA after disposing of Central Private School 47-22 last Friday night.

Actually, this is a familiar opponent for ACCS. The Rebels ‘defeated’ the Buccaneers 60-25 back on Oct. 5.

But because of the ruling by the Mississippi Association of Independent Schools less than a week later against ACCS, the Buccaneers will now head into the playoffs with an 8-2 record instead of 7-3 as well as the District 4-AAA champions.

And if playing Bowling Green twice in a three-week span wasn’t enough, the Rebels will be making a return trip to Franklinton, La., to face the Buccaneers with kickoff Friday at 7 p.m.

“It was homecoming for them. There were a lot of distractions. I expect a whole different team,” King said. “To beat somebody twice is tough, and to do it at their place both times is even tougher. They’re a good football team and are deserving of their seeding.”

Two players on Bowling Green’s offense that could be a concern for the Rebels are senior quarterback Johntae McDowell and senior running back Larry Dillon. They accounted for all four touchdown runs in their first meeting, with Dillon having three of them.

King also said that the Buccaneers’ defense probably won’t take as many chances as they did when these two teams last faced each other.

“Their quarterback and running back may be two of the best players we see this season. They’re that explosive,” King said. “They took a lot of chances (on defense) last time. They gave us a couple of easy touchdowns. I don’t think that’ll be the case this time around. They’ll play more conservatively.”

King said that the Rebels’ defense will have a big task ahead of them in trying to contain Bowling Green’s offense. He added that the offense must continue to do what it’s done this season and keep other things to a minimum.

“We cannot turn the ball over. It’ll come down to turnovers and penalties. Playoff games always do,” King said.

NATCHEZ — Despite having to forfeit seven wins after a player on its roster was ruled ineligible over a week... read more