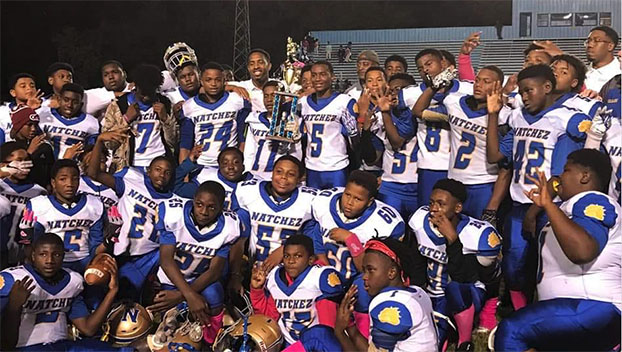 NATCHEZ — For the third straight year, Natchez Middle School’s football team won the Southwestern Mississippi Conference championship. And for the second consecutive year, they did so with an undefeated record.

“I feel blessed to know that we’re establishing a culture of winning without even having to talk about winning,” West said. “The players have bought into our thing of if you prepare to win, you expect to win. But we don’t talk about it. My coaches, they buy into the schemes and systems.”

Natchez Middle School had to travel to and defeat Port Gibson last Thursday to win the conference championship. NMS won in decisive fashion 26-0.

“Our motto this year was, ‘We want to define discipline’ – on the field, in school, and off the field.

West added that, just like Natchez Middle School, Port Gibson went into the title game as an offensive powerhouse, scoring 40 to 50 points on their opponents. That would not be the case this time around as the home team got shut out.

Michael Williams had a fumble recovery for a touchdown and he had two receptions for about 130 yards. Offensively, Traylon Minor threw a 60-yard touchdown pass and ran for another score. Defensively, Eldrin Brown had two interceptions.

But those were not the only players who shined for NMS this season.

“The week before, Koren Harris had three interceptions, one of which he returned for a touchdown in our homecoming game,” West said. “Terrell Penro had eight touchdowns for the season. He was a dynamic force. And he played linebacker in his first year for us.”

West added that this year’s team was full of scholar-athletes. He said that some were SOAR students and others were honor roll students.

Twice would be nice: ACCS faces Bowling Green in playoffs for second time in a month