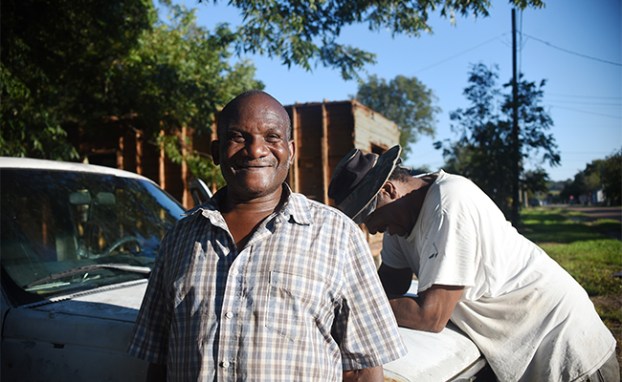 Melvin Bell and Laron Johnson take a break in Natchez on Saturday from tearing down a house owned by Bell's aunt. (Nicole Hester, The Natchez Democrat)

VIDALIA — A Vidalia resident pondered whether memories ever die as he took a break Saturday afternoon from pulling down parts of a house that he said holds memories from his childhood.

When The Dart landed in the vicinity of Beech Street on Saturday afternoon, Melvin Bell and his neighbor and lifelong friend Laron Johnson were finishing up a day’s work — taking apart the old family house that has been a part of Bell’s life for as long as Bell said he could remember.

“This house has been in my family ever since it was built,” Bell said. “This was my great-grandfather’s land. … My aunt (Gertrude Hill) … lived there all her life.”

Bell, who is 62 years old, said the old and small house, which contains little more than a couple of rooms, has been sitting empty for a number of years.

Bell said he works nights and weekends, pulling the house apart one board at a time.

Bell said he lives on an extension of his family’s land right next door to the house, and he has watched the house wither away and the memories with it.

Bell said he still remembers spending time in the old house with his aunt, whom he said was like a second mother to him.

“My cousin, whom (Hill) raised, said it was making her sad to see it fall apart because when it goes, the memories go, too,” Bell said. “When she died, there was no one left in it, so I was told to just take it down.”

STARKVILLE — Led by senior running back Taylor Arnold and a defense that held Cathedral High School to under 100... read more