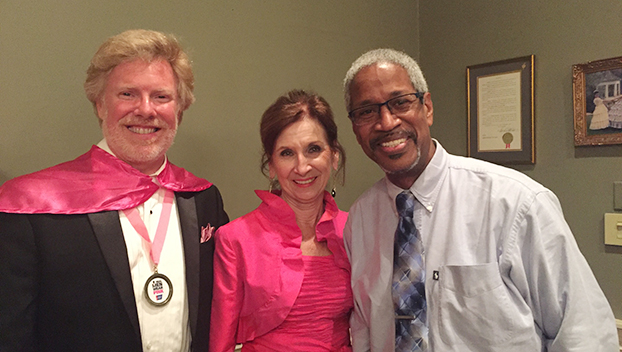 NATCHEZ — The Natchez community has stepped up in a big way to fight cancer and raised more than $28,000 to date as part of the American Cancer Society’s Real Men Wear Pink fundraising campaign.

Real Men Wear Pink features men who volunteer to raise funds in their communities to benefit the American Cancer Society.

Dan Gibson heads the local fundraising efforts as the leader of Team Natchez. With the campaign deadline of midnight on Halloween nearing, Gibson said he is optimistic about getting some last-minute donations.

Gibson said the last-minute drop-off spot for donations will be Darby’s, 410 Main St.

A large part of the funds raised came through Concerts 4 the Cure, a series of concerts held throughout the summer, Gibson said. The concerts offered genres of gospel, local songwriters, classical and last Sunday’s All-Broadway concert, which brought in more than $8,000 alone, Gibson said.

This is Gibson’s first year to lead Team Natchez and his efforts have taken the team to second place among a group of 24 Central Mississippi team leaders. Gibson said it would be nice for Natchez to win the friendly competition, but he also added that the true satisfaction comes from making a difference in the fight against cancer.

“It doesn’t really matter if we win or someone else wins. At the end of the day we’re all winners because we worked to make a difference,” Gibson said. “I believe we need to promote all we can to raise awareness and fight cancer. It’s fun to win, but we’re just passionate about the cause.”

Gibson said the Rev. Kevin Deason of the New Direction Outreach Ministries would lead the fundraising efforts for Team Natchez next year.