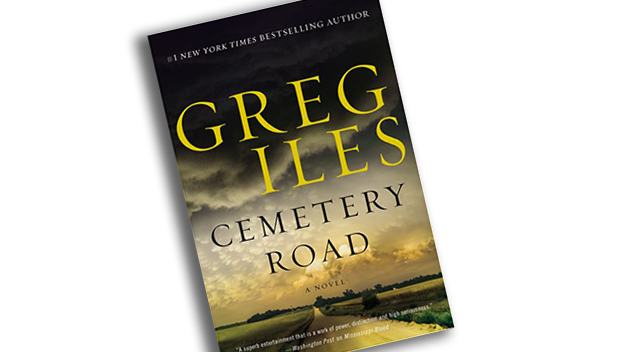 “Exciting news,” Iles posted on social media, “next year the world will get a new stand-alone novel by Greg Iles. CEMETERY ROAD goes on sale in the US on March 19th.”

“I get a lot of mail from people asking whether this is a Penn Cage novel,” Iles said Tuesday. “It’s not.  And because of the title, local people assume ‘Cemetery Road’ refers to the one in Natchez.”

This novel, however, Iles said, is set in a fictional river town that lies between Vicksburg and Natchez.

“’Bienville, Mississippi,’ and ‘Tenisaw County’ have a similar history and racial makeup to Natchez,” Iles said, “but are also different in important ways.”

“Cemetery Road” tells the story of Marshall McEwan who left his hometown of Bienville at 18 vowing never to return.

McEwan goes on to find success as a journalist in Washington, D.C., but his father’s illness brings him back to his hometown of Bienville, despite his vows never to return.

Once back home, McEwan encounters corruption and scandal in his small hometown and uses his journalistic skills to unravel the mystery, which threatens to destroy his relationships.

“The more internal theme involves a successful native son — a journalist — returning home from Washington to take care of an ill parent. While home, he becomes involved with a married woman he loved long before, and whose husband is his lifelong friend. To make matters worse, that friend saved the narrator’s life in Ramadi, Iraq. And as with most of my novels, the family secret that lies at the heart of this affair is something you cannot guess and will leave you shocked.”

Monday’s social media post included a link to promotional material on the publisher, Harper Collins’ website, which describes the novel as a “… tale of friendship, betrayal, and shattering secrets that threaten to destroy a small Mississippi town.”

In his Oct. 23 social media post teasing Monday’s announcement, Iles included an image of a page with the following text:

“All this I have done, yet I am still a free man. Most who know me would declare me an honorable man. I wouldn’t go that far.

“But I try to be a good man. Most of the time I believe I succeed. How is this possible? These are complicated times we live in, and it’s not easy to be good.”

The Oct. 23 post had received more than 1,000 likes as of Tuesday afternoon with 177 comments from fans.

“I’ve been waiting for another book,” one comment states. “I’ve read all of your novels. You’re my favorite author by far. Thank you for all the hours of entertainment you’ve provided!”

Another comment reads, “Is this ‘Cemetery Road’? On our recent trip to the USA we stayed in Natchez at a B and B on Cemetery Road! The Turning Angel was just down the road.”

Another commenter said, “I LOVE your books ESPECIALLY the trilogy. I’ve read turning angel and third degree twice!!! Even though I know what’s coming, I still get nervous:).”

Iles said he received help from friends in Natchez in writing “Cemetery Road.”

“Jim Barnett was particularly helpful on the subject of archeology and Native Americans of Mississippi,” Iles said. “Dr. Chuck Borum helped with this, and also on the subject of the Boy Scouts. My friendships with older Natchezians and my political work in Mississippi have given me a lot of insight into the things that greed for money or power will drive people to do.”

Iles said he will embark on a national book tour in March.

“Beginning in Natchez as always,” Iles said, “with a charity book signing.”

Margaret Martin is worth saving

A group of spirited doers has taken its collective sights on the former Margaret Martin School building and has plans to... read more