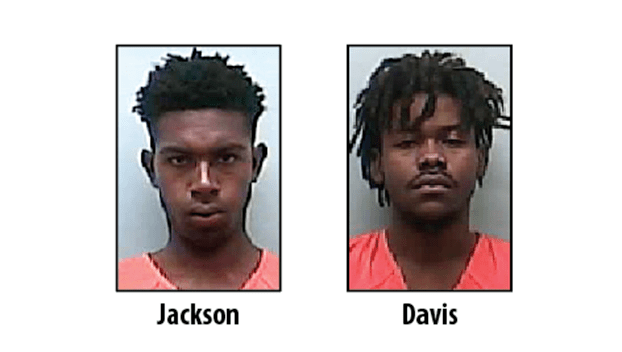 The charges came after deputies with the Adams County Special Operations Group and Investigators with the Natchez Police Department made a traffic stop Monday of a blue Buick for an equipment violation, officials said.

The Buick, which had just left the Holiday Apartments in Natchez was occupied by four people “until two subjects bailed out of the vehicle at the intersection of Maple and Reynolds streets.

Davis and Jackson were transported to the Adams County Jail, Daugherty said.

The first search was of a residence that had recently been shot into at 124 Brightwood Ave. and turned up a loaded .380-caliber pistol of which no one in the residence claimed ownership.

The second search was of an apartment in the Holiday Apartments. Officials said no one was home at the time of the search, but a loaded handgun was found in the bedroom.

“Both guns have been preserved and will be submitted to the Mississippi Crime Lab to see if they have been used in any crimes,” said Adams County Sheriff Travis Patten.