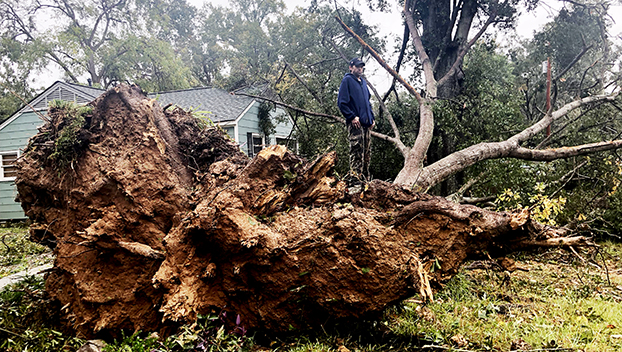 Oakland Subdivision resident Max Hearn stands on the tree that was uprooted in front of his house during Thursday morning’s storm. Limbs from another large tree fell through his roof. (Ben Hillyer / The Natchez Democrat)

Faith and Family: Residents grateful to be alive after storms

NATCHEZ — Several Natchez residents say they are happy and grateful to be alive after early Thursday morning storms caused damage throughout the city.

Lynn Brown said she was asleep in her duplex unit at 309 Dumas Ave. in the Maryland Heights subdivision when weather sirens awoke her.

“It sounded like train,” Brown said of the wind that blew the roof off of the duplex unit and carried the roof into a nearby vacant lot.

Brown said she was thankful to be living Thursday afternoon while she was standing in front of a pile of bricks from her house that had crumbled in the storm.

Micki Williams, Brown’s neighbor in the duplex unit, said she too was not only was happy to be alive but also happy that her four children were not injured.

“We woke up when we heard the sirens go off,” Williams said. “We went out the back door. I’m happy me and my kids got out. It could have been very much worse. We’re just grateful we got out alive.”

Both Brown and Williams said their possessions were ruined in the storm after the roof blew off.

“Furniture, possessions, bedroom, clothing, shoes and stuff,” Williams said of her losses while standing in the front yard as men worked to put a tarp on the damaged roof of the duplex.

Maryland Heights is managed by the Natchez Housing Authority, and assistant manager Janice Herbert said Williams and Brown would be relocated into other units in the subdivision until their units are repaired.

In all, Herbert said 28 of Maryland Heights’ 93 buildings were damaged in Thursday morning’s storms, most suffering only minor damage, such as shingles missing from roofs. Three units, including Brown and Williams’ units and one on Watts Avenue that had a tree fall on it, suffered heavy damage.

Herbert said the occupants of the Watts Avenue unit were not injured and would also be placed in another unit in the Maryland Heights subdivision.

Cambridge Heights, Lowery said, had several trees down but no units were heavily damaged.

Tim Johnson was not so lucky. A tree fell on his house on Morgantown Road during Thursday morning’s storms.

Johnson said he and his wife, Carolyn, were sleeping when they heard the crash of the tree falling on the front corner of their house.

“We got up and a limb hit the (bedroom) window and knocked a window unit out of the window,” Johnson said, adding no one in his house was hurt in the storm. “It just scared us.”

Johnson said his two dogs and a cat also were startled in the storm.

Other Morgantown residents described their initial thoughts as the storms passed through the area Thursday morning.

“I woke up and I thought I was having a nightmare and then I thought we were having an earthquake,” Morgan Avenue resident Max Hearn said Thursday morning. “I looked at my phone and saw the tornado warning and scooted into the hall.”

Hearn had just moved from Baton Rouge into his stepfather’s house on Morgan Avenue.

As the storm passed over, Hearn described the winds as horrific.

“It sounded like God screaming at us. It was horrible,” Hearn said. “I have never heard anything like it and have never been so scared in my life.”

One tree in front of Hearn’s house was uprooted and another tree behind the house dropped large limbs on top of the roof. The limbs went through the roof into the attic Hearn said.

Two houses down the street, a large tree fell on top of Jennifer Lyles’ house, damaging the house and three cars that were parked in the driveway.

Lyles said she was asleep when she heard what must have been the tree falling on the house.

“I heard a boom. The force was so heavy it threw me out of the bed,” Lyles said. “I stood up, and I was rocking. I heard my ceiling and walls starting to cave in, so me and my son had to crawl to the living and dining room and crawl out the side door.”

Neither Lyles nor her son suffered any injuries.

Both Lyle and Hearn said they were thankful that nobody on their street was killed or injured during the storm, especially with the number of trees and limbs that were on the ground.

Mayor Darryl Grennell and interim Fire Chief Ventriss Green were surveying the damage on Morgan Avenue, helping arrange assistance for Lyles and others whose houses were severely damaged.

“We have been out since 2:30 this morning. The biggest damage is in (the Morgantown area) thus far,” Grennell said. “From what I have seen personally.”

NATCHEZ — The National Weather Service in Jackson confirmed Thursday that some storm damage in the Natchez area was caused... read more