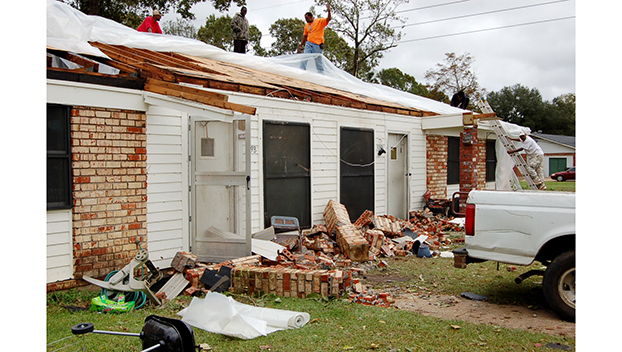 Construction workers place a tarp on the roof of a duplex in the Maryland Heights subdivision Thursday afternoon after a storm damaged the unit early Thursday morning. The unit is managed by Natchez Housing Authority and the occupants have been placed in other units in the subdivision. (Scott Hawkins / The Natchez Democrat)

Two tornadoes confirmed: One in Morgantown area, one near Sibley

NATCHEZ — Emergency responders, law officers and even a few civilians rallied their efforts to assist those impacted by severe storms and tornadoes that tore through parts of the Miss-Lou early Thursday morning.

National Weather Service workers from Jackson determined at least two tornadoes touched down in Natchez and Adams County on Thursday.

Senior forecaster Brad Bryant said NWS investigated the tornadoes, which touched down near Morgantown and Sibley just after 2 a.m.

A tornado with estimated winds at 115 mph and started West of Morgantown traveled a mile through the Morgantown community between approximately 2:06 and 2:08 a.m., Bryant said.

The second tornado started in Adams County near Sibley and was tracked another mile with estimated winds at 107 mph, which caused mostly tree damage as it crossed Kingston and Cherry Grove Plantation roads between approximately 2:07 and 2:09 a.m.

“They were moving relatively fast,” Bryant said. “We’re surveying a couple more possible tornadoes in Claiborne County and some in Louisiana.”

Bryant said the National Weather Service would continue to conduct studies and provide updates for other areas.

Adams County Emergency Management Director Robert Bradford said the county was fortunate to have made it through the storm with no fatalities.

“It’s a blessing that we didn’t have numerous injuries or fatalities given the damage assessment we’ve had,” he said. “No weather-related injuries reported through our office, but that isn’t to say that none occurred. People still could have driven themselves to the hospital independently.”

EMS received between 40 and 50 storm-related calls that ranged from hazardous limbs hanging to individuals trapped in their houses and cars, Bradford said.

“We were well-prepared and that was one of the key things that allowed us to respond as quickly as we did,” he said. “Part of our plan was to relieve some of the non-emergency 911 calls to assist our law enforcement officers so they could continue to perform their duties.”

Bradford said county officials are diligently at work assessing the damages from the storm to determine what residents have lost.

Across the Mississippi River, Walter Mackel — a deputy with the Concordia Parish Sheriff’s Office — said he witnessed damages on Grigsby Road in Jonesville where neighbors pulled two adults and two children out of a trailer that appeared to have rolled over on its side and was demolished.

Only two of the residents had minor injuries, Mackel said — one child and a Catahoula Parish deputy who was off duty.

They received treatment in Catahoula Parish and were released later the same morning.

Chief David Hedrick of the Concordia Parish Sheriff’s Office said most of the damages appeared to have extended northward from Monterey through Jonesville and Wildsville, where he saw rolled houses, businesses with roofs thrown half a mile and several downed trees and power lines.

Hedrick said he was very moved by the support from his officers, civilians and other agencies, who stayed out on patrol from approximately 1 a.m. to 9 a.m. Thursday ensuring that no one was hurt.

“When we were out there, I’ve seen so many of our citizens come out to help their fellow citizens and also our first responders, deputies and Catahoula Sheriff’s office deputies as well,” he said. “They didn’t have to be out there, and they were. It was very touching.”