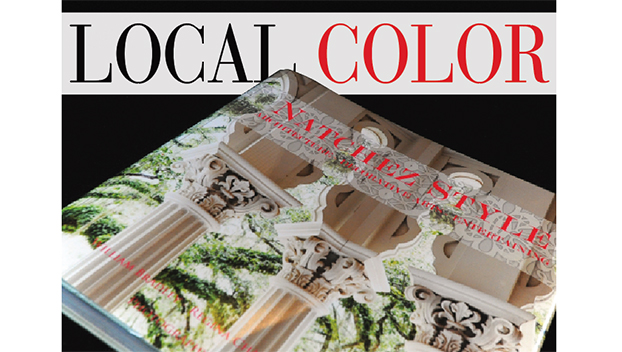 NATCHEZ — When the book “Natchez Style” gets shipped out this week — hot off the press — people will not only be able to read about 27 different antebellum houses featured in Pilgrimage Garden Club tours, but they’ll also be able to see and taste them, too.

Local Chef Regina Charboneau, architect William Bradley and Dallas photographer Manny Rodriguez are the creative trio that produced 370 pages with Natchez written all over them from start to finish.

In addition to details about each house — including architectural design, historical facts and even a bit of the homeowners’ personalities — the book also features more than 100 recipes that are customized for each house, Charboneau said.

The book costs $60, but is available for $50, Charboneau said, and all of the proceeds will be used for the historic preservation of Stanton Hall and Longwood.

“I worked on menus for each house that fit the way people entertain in their home,” she said. “It’s just what I do. … I wanted it to be ‘Natchez Style,’ but also influenced by the homeowners.”

Charboneau said this is the fourth book with recipes she has ever produced but the first she has ever done in a partnership of this caliber, which took more than a year to complete.

“I think we’ve made a great team with the three of us,” Charboneau said. “I’ve never collaborated before on a book and it was fun. … We have so many things happening on these grounds. … We’re trying to make these houses fun for people, and this book reflects that.”

Bradley, who has lived in Dallas and at the Williamsburg house in Natchez for the past five years, said he did most of the written content and did his research into each house and the owners.

“It has been about two decades since a colorful coffee table book was done of these Pilgrimage houses, and we figured it was about time for a fresh look,” he said, “but the main reason we did it is to raise funds for Stanton Hall and Longwood.”

Bradley said he gathered a lot of historical background by talking to each homeowner, but also added their personalities.

Bradley said the writing and recipes combined with phenomenal photographs taken in at least 27 different shoots by Rodriguez helped capture the character of each house.

“It adds a lot of personality to the book,” he said. “We wanted the readers to feel like they’ve met the homeowners. … Natchez is so special. Sometimes those of us that live here forget how unique it actually is.”

Charboneau said the book is available for pre-order at Longwood and online at natchez.syle.com.

A free and public book event will be 5 p.m. Nov. 29 at the Carolyn Vance Smith Natchez Literary Research Center at the Copiah Lincoln Community College library in Natchez, 11 Co-Lin Circle.

The Co-Lin event will feature refreshments, book signings and book sales. At 5:30 p.m., authors of the book will be introduced.

Then two people whose houses are pictured in the book will speak on the topic of “Living with History.”

The house-owners are Marsha Colson, whose house, Lansdowne, was built in 1853 by her direct ancestor and Deborah Cosey, whose house is Concord Quarters, a two-story brick building that was built in the 1820s as slave quarters on the grounds of the now-destroyed mansion Concord. Cosey and her husband, Gregory Cosey, recently restored the brick building.

Both houses are part of the historic fabric of Natchez, with different stories to be told.