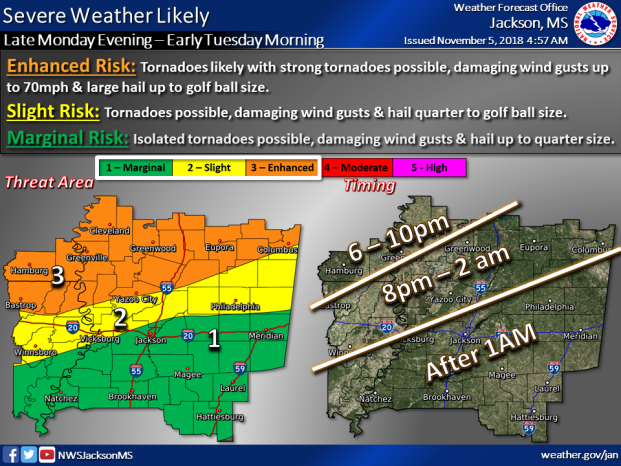 NATCHEZ — National Weather Service in Jackson said northern and central Mississippi counties face yet another risk of severe storms in the early Tuesday morning hours with the greatest risk in the northern counties above U.S. 82.

“Right now, there’s still a chance for some isolated thunderstorms,” meteorologist Latrice Maxi said Monday afternoon. “You could see some tornadoes, strong winds and hail. … The best chance of that is going to be after midnight tonight.”

“We will be monitoring this system,” Bradford said, adding plans are in place for sift response from associated agencies.

In a storm system that passed through Southern states between late Wednesday an Thursday morning last week, at least 28 tornadoes were confirmed by National Weather Service surveyors in Texas, Louisiana, Mississippi and Alabama — nine in Louisiana and 10 in Mississippi, including one that passed through Natchez with estimated top winds of 115 mph and another near Sibley with estimated top winds of 107 mph.

Though the forecast for election-day Tuesday morning is sunny and dry, Maxi advised locals to watch the news before going to bed Monday evening and keep all weather alerts on electronic devices turned on.

“The best thing you can do is stay weather aware,” she said “If you have alerts coming to your phone, don’t turn them off. If you have a weather radio, keep it close by.”

NATCHEZ — The suspect in an Aug. 29 shooting who fled to Texas has been extradited and was being held... read more