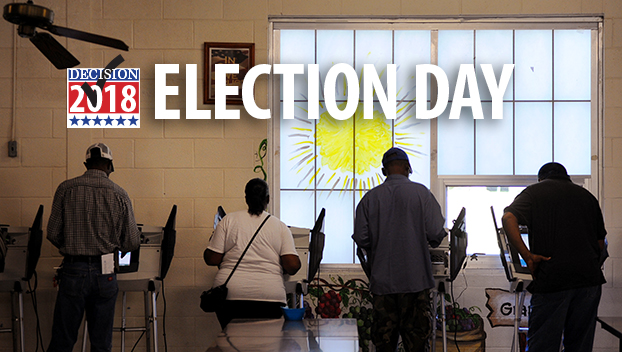 Election update: Officials say turnout is high across the Miss-Lou

NATCHEZ — Voting is underway throughout the nation as voters go to the polls in the mid-term general election to cast ballots for U.S. Senate, U.S. House of Representatives and various other local government positions and measures.

In the Miss-Lou turnout is high, local election officials say.

“It’s busier than a cat scratching in a marble hall,” said Larry Gardner, Adams County election commissioner. “This is going to be one of the best voter turnouts ever.”

Adams County received 826 absentee ballots by the end of the day Monday and Gardner said the county received a lot of affidavit ballots as well.

The busy election day came with some difficulty early in the day.

Lynn Smith said she was upset when the wrong judge candidate appeared on her ballot at Crosspoint Church.

Smith said she wanted to cast her vote for Debra Blackwell, who is running unopposed for circuit court judge, District 6-2.

Instead, Smith said her ballot only offered the option of Lillie Blackmon Sanders, who is running unopposed for circuit court judge, District 6-1.

Smith said poll workers couldn’t answer why Blackwell was not on the ballot.

“Everyone just shrugged, so I went ahead and voted,” Smith said.

Theresa Davis, of Natchez, said she also noticed Sanders’ name on the ballot, and while she wasn’t upset about it, she said she is concerned about a fair race for all candidates.

“If something is being done that is not supposed to be, everything should be fixed and it should be fair,” Davis said.

Smith said she was concerned that it might be affecting the contested races.

“I take my voting rights very seriously, and to have a mix-up like this is really bad,” Smith said.

Someone was coding the ballots incorrectly, Gardner said, but the error only involved the unopposed candidates.

“Apparently this morning they were coding the wrong ballot style,” Gardner said. “They (the voters) didn’t tell us until after they cast their ballot, and we can’t let them vote again.”

At 2 p.m., Gardner said he believed the problem had been resolved.

Another problem occurred at Marilyn Heights where a fallen tree limb fell and men working on power lines were blocking cars from accessing the voting site, Gardner said. As of 3 p.m., the limb was removed and one lane was cleared for traffic.

Voting had been going smoothly as of noon Tuesday in Adams County, Gardner said,  with only minor hiccups, such as one malfunctioning voting machine that had to be swapped out.

“Other than that, we’ve been really lucky,” Gardner said. “We’ve been getting a lot of people calling to find out where they vote since they haven’t voted in a while, which is normal.”

Poll worker Ornsby Young has been working polling places for 50 years, including 30 years in Natchez. As of 10 a.m. 106 people had voted at her polling place at Rose Hill Missionary Baptist Church.

“That’s a fair turnout,” Young said, adding no problems had been reported at Rose Hill as of 10 a.m.

As of 9:30 a.m., 120 voters had cast ballots at the Liberty Park precinct in the Adam’s County Safe Room.

Signs were posted in and outside the building to inform voters that former circuit court candidate Holmes Sturgeon, who died Oct. 10, would still appear on the ballot since ballots were printed before his death.

Polls remain open in Concordia Parish until 8 p.m. and in Adams County will be open until 7 p.m.

“Get out and vote,” Gardner said. “It is a beautiful day so you have no excuse.”

Images from Tuesday’s mid-term elections in the Miss-Lou. read more