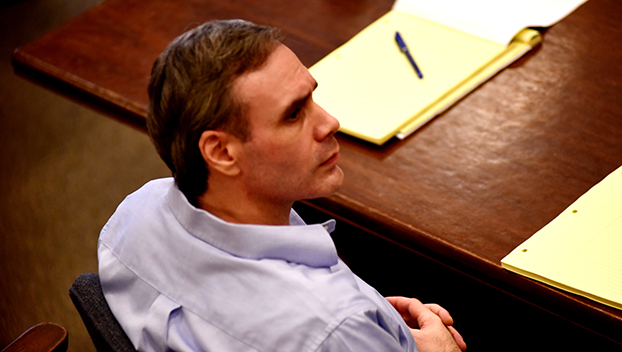 Jeffrey Havard listens to testimony in an August 2017 hearing ordered by the Mississippi Supreme Court to determine if a new trial is warranted. Havard was sentenced to death in 2002 in the death of Chloe Madison Britt. (file photo)

NATCHEZ — The man convicted in 2002 of capital murder in the death of a 6-month-old baby no longer faces a future on death row.

Monday morning, District Attorney Ronnie Harper announced that the state would no longer seek the death penalty against Jeffery Havard, who had his 2002 death sentence recently overturned.

An Adams County jury convicted Havard of capital murder and sentenced him to death in 2002 for the death of his girlfriend’s 6-month-old-child. Havard had been on death row for 15 years until Johnson vacated the sentence.

Johnson declined to order a new trial for Havard but did order a new sentencing hearing for a jury to determine if Havard should receive the death penalty or life in prison without the chance of parole.

“From the day of the court’s ruling setting aside the sentencing, we have had an opportunity to review the files,” Harper said. “It was a long time ago.”

Representatives for the Attorney General Jim Hood said the state defers to and agrees with the district attorney.

Johnson recessed the hearing and said the court would set a date for sentencing after he has had a chance to review sentencing options.

Johnson told Havard that as of Monday, the threat of the death penalty is no longer.

“Mr. Havard, ever what happens from here on out, you need to thank these attorneys. They have saved your life whatever happens with this,” Johnson said. “I don’t know what will happen with this and obviously there are rights to appeal … but as of right now you no longer have the threat of the death penalty against you.”

Havard’s family members who were in attendance said although they are happy that Havard is no longer on death row, the case is not over.

“Jeffery didn’t get a fair trial to begin with,” Havard’s sister Tiffany Britt said. “This is not enough. If he would go back to trial and a jury would hear everything the verdict would be different.”

Havard’s mother Cheryl Harrel said the family is not content with the results of Monday’s hearing. The family wants to appeal and get Havard a new trial.

“This is a small step,” Harrell said. “This is not the end.”

Voters go to polls to vote in mid-term elections today

NATCHEZ — Voters throughout the nation will go the polls today in the mid-term general election in which members... read more