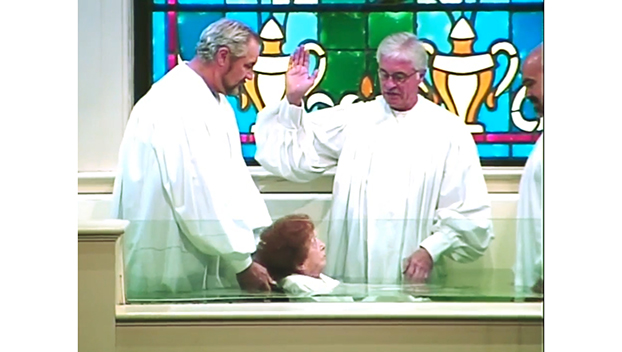 Mabel Dobry is baptized by the Rev. Doug Broome at First Baptist Church in Natchez. Dobry, 92, was baptized while in a wheelchair Sunday during the morning service at the church. (Submitted)

Faith and Family: 92-year old woman in wheelchair gets baptized

NATCHEZ — You’re never too old to get baptized.

Just ask Mabel Dobry, 92, of Natchez who was baptized, while in a wheelchair, Sunday at First Baptist Church in Natchez.

Dobry was injured several years ago and walks with the assistance of a cane, said the Rev. Doug Broome, pastor of First Baptist Church Natchez, so the church decided to utilize a wheelchair for the baptism to minimize problems with getting Dobry into the baptismal.

“Two of our big, strong guys who lift weights picked her up, and immersed her,” Broome said.

“Whenever they rolled me in I was excited,” Dobry said. “When they rolled me into the water, I had the oddest feeling I ever had. My body floated out of the chair. It was odd and felt like, ‘Is God taking me now?’ It felt real good.”

Dobry said she has been a Christian since she was a child growing up in Mississippi.

“When I was younger,” Dobry said, “I was in — before I got in my teens — a country Baptist church, and the pastor there was from up North. The pastor’s wife got sick and he had to leave to go back up North and didn’t get to come back, so I never got baptized.”

Dobry said other Christians and church members said it did not matter that she was still saved through her acceptance of Christ.

“In my heart, I wanted to be baptized,” Dobry said.

Life took her through many ups and downs, Dobry said.

“My life has been rags to riches and riches to rags,” said Dobry, who married a man from Florida and who had a thoroughbred horse training facility for which she worked for many years before returning to Mississippi.

Broome said other denominations had offered to baptize Dobry by sprinkling water, but she wanted to have a full immersion baptism.

Broome said the wheelchair baptism was the first in his 30-year career, and Dobry also is the oldest person he has ever baptized.

It also was exciting for the church, Broome said.

“Our whole church family rose up and gave her a standing ovation,” Broome said. “Her testimony was, you’re never too old to be baptized.”

NATCHEZ — A Natchez bed and breakfast owner was sentenced to eight years in prison Monday for shooting at a... read more