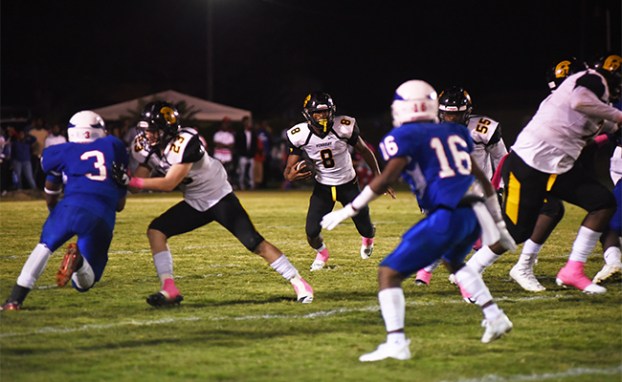 FERRIDAY — Coming off its first outright district championship since 2010, the Ferriday High School Trojans will look to carry that momentum into the 2018 Class 2A Playoffs as they host the Vinton High School Lions in a first-round game today at 7 p.m.

Ferriday enters the playoffs at 7-3 overall and as the No. 3 seed after shutting out Beekman Charter School 44-0 to run the table in District 2-2A with a 6-0 mark. Meanwhile, Vinton is the No. 30 seed, but not your typical low seed with a 4-6 overall record.

However, the Lions also enter the postseason on a three-game losing streak. That includes a 34-14 loss at a Pickering High School team that didn’t even make the playoffs. The Lions finished 1-4 in District 4-2A.

Trojans head coach Stanley Smith said the players understand that the playoffs is a big time of year because of the win-or-go-home situation that goes with it. As for what they’ve been working on in practice this week in preparing for Vinton, Smith said. “Just make sure that we come out focused on our assignments. Coming off a district championship, they’re excited. We’ve been putting in a lot of film study and understand what they’re doing schematically offensively and defensively. They want to do better than they did last year.”

And by that Smith means going past the Class 2A quarterfinals and all the way to the state championship game.

As for what concerns him the most about the Lions, Smith said, “They’re running the ball pretty good. Big o-line and d-line. We have to make sure we have the proper checks so we can execute. That’s why we’ve got to make sure that we avoid a letdown. Taking care of business. We’ve picked up the intensity a little bit.”

Smith said it will take a full team effort for the Trojans to come out with a win Friday night with an enthusiastic crowd at Melz Field watching on.