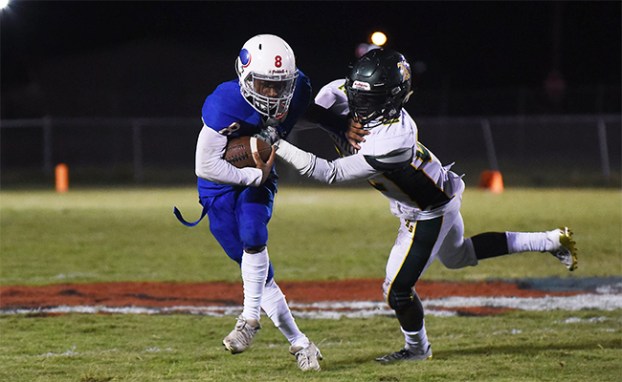 VIDALIA — The Vidalia High School Vikings will welcome a familiar opponent to Dee Faircloth Viking Stadium tonight when they host the Oakdale High School Warriors in the first round of the LHSAA Class 2A Playoffs.

Kickoff between No. 25 seed Oakdale (3-7) and No. 8 seed Vidalia is set for 7 p.m. The Vikings are coming off a 50-22 win over Delhi Charter School that allowed them to finish in second place in District 2-2A. But there was one element of that win that Viking head coach Dee Faircloth wasn’t too pleased with.

“We’ve been kind of messing around in the first half and pouring it on in the second half. We’ve got to come out on fire in the first half,” Faircloth said. “Last week, we started the game and fumbled the opening kickoff. Then our first possession, we it again. We gave them two opportunities inside the 20. We can’t do stuff like that.”

Among the things it will take for Vidalia to come out with a win tonight, Faircloth said, “Just to execute and be consistent. Play lights out the first half.”

Faircloth said the Vikings have been working mainly on improving on the things that they do and not so much what Oakdale does.

“Improve on our offense, execution and what have you,” Faircloth said. “They’re a good ball club to be 3-7. Oakdale’s a tough team. They come after you. We’ve played them in the past, so we know what to expect from them.”

The Warriors finished fourth in District 4-2A with a 2-3 mark, which included a tough 35-33 loss at DeQuincy High School.

Faircloth said their running game, their recent stretch of high-scoring games are what concerns him the most about the Warriors.

NATCHEZ — Henry Harris has done a lot for the sport of tennis not only in his hometown of Natchez... read more