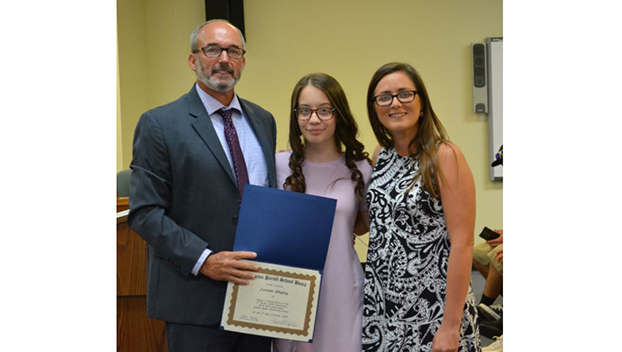 NATCHEZ — Tommie Wagley, now a sixth-grader at Vidalia Junior High School, made her fifth-grade English teacher proud simply by doing what she loves.

“I like to read,” Wagley said. “I don’t really have a favorite thing to do. Most of the time I just sit at my house and read. … When I was in third grade, I read almost all of the Goosebumps books. … Reading tells you a story, and you get to paint a picture of it in your mind.”

Wagley scored a perfect score of 850 on her ELA LEAP exam, which her teacher, Amanda Gill, said: “made her career.”

Wagley said the test didn’t feel as easy while she was taking it as her results made it seem.

“I was nervous while I was taking it,” she said. “I finished fairly quickly on all but one of the tests — the written one. … We had to finish a story, and I was the next to last one to finish it.”

Wagley said her friends teased her about taking her time on the test, but the end results paid off. Gill presented her with a Kindle tablet last month to show her appreciation for Wagley’s hard work.

Wagley said she mostly likes to read about worlds others have imagined, though she had dabbled a little in writing her own stories as well.

“When I was little, my friend and I wrote a book about us just being friends … how we met and some of the funny things that happened in our lives,” Wagley said. “We ended up throwing it away because we read it later and thought it was embarrassing. … ”

Wagley said reading and science are her passion because she likes to explore both the real world and fictional ones.

“I like reading about somebody else’s world because you get to see things from their perspective.”

Wagley is the daughter of Woody Wagley and Jennifer Naff.

Chance of snow? Say it ain’t so

I am not sure if Natchez has ever seen snow this early in November, but — believe it or not... read more