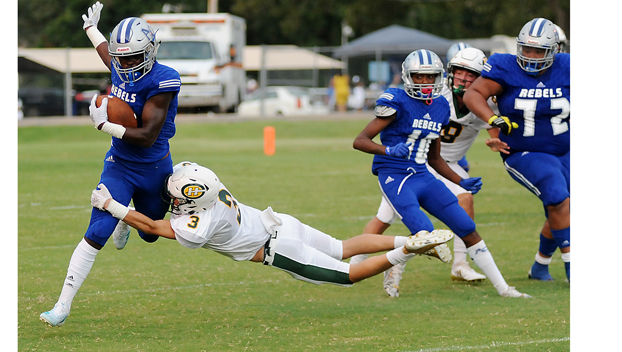 ACCS was undefeated and would have been the top seed for the playoffs, until the first seven games were negated when the Mississippi Association of Indpendent Schools ruled an ACCS player ineligible and the wins came off the team’s record. Technically, ACCS is still undefeated. (Ben Hillyer, The Natchez Democrat)

NATCHEZ — Adams County Christian School was supposed to be in the MAIS Class AAA State Championship game against the team that ended up with the No. 1 seed in Indianola Academy. But not the way that ACCS had to go about getting to this point.

The Rebels were expected to more than likely be the No. 1 seed themselves with an undefeated record and the District 5-AAA championship going into the playoffs. But after having seven wins taken away from them just days before their showdown with cross-town and district rival Cathedral School, they had to win out just to make the postseason.

They did just that, beating the Green Wave 39-6 and then Central Private School 47-22 to get in as the No. 14 seed with a 2-7 overall record. All ACCS has done since then is pull off upset wins over No. 3 seed Bowling Green School 30-19 in the first round, No. 6 seed Starkville Academy 32-13 in the second round, and No. 2 seed Heritage Academy 28-10 last Friday night in the semifinals — all on the road.

Now the 5-7 Rebels have one more opportunity to prove that they are the best team in Class AAA when they take on a 12-1 Colonels team that is on a 10-game winning streak at 7 p.m. Saturday at Jackson Academy.

And it’s not just Sterling Yarbrough, Jakarius Caston and DJ Stampley who have had big games for the Rebels during their five-game winning streak. Yohan Thompson, Kemari Clark, Cory Sewell, Rhet McDonald, Dawson Parker, Greg Jones, and Glaston Magee have also had outstanding performances during this stretch.

ACCS head coach David King said the cold weather shouldn’t have much of an impact during practice this week as the Rebels prepare for the Colonels.

“It’s miserable, but it’s miserable in Indianola,” King said. “We’ve been handling all types of adversity, and the weather is another factor to deal with if you want to finish it.”

King said having an extra day of practice would be beneficial for his team not only for what Indianola Academy will be bringing, but also for some players to heal up.

“It’s big for us because we’re so beat up. This late in the year with so many tough ball games, we’re plagued by injuries,” King said. “It will get some of those guys as close to 100 percent as possible.”

Indianola Academy, which would have been the No. 2 seed, hasn’t lost a game since a 20-14 loss at Starkville Academy way back on Aug. 31. The Colonels have only been tested twice during that run. The won at Class AAA Washington School 17-7 on Sept. 28 and held off District 1-AAA rival and No. 8 seed Bayou Academy 16-13 in the second round.

“This will be their fourth state title game in a row. They’ve only lost four ball games the last four years. They’re well-coached and they’re very physical. They’re going to be the best ball team we face all year,” King said. “When the season started, everybody knew Indianola would be there. The question would be who they would they be facing.”

In the first round, the Colonels beat No. 16 seed Park Place Christian Academy 42-12. Last week in the semifinals, they soundly defeated No. 4 seed Central Hinds Academy 34-3.

“They’re going to run the football and try to push you around. And they’ve been very successful at it,” King said. “Defensively, they’re very aggressive. They like to blitz. They take great pride in stopping the run. Overall, they’re athletic from the safeties up to the nose guard. You’ve got to earn it all.”

And just like the last five games, it will take a total team effort and playing mistake-free football for ACCS to topple Indianola Academy and win the Class AAA state championship.

“We’re going to have to play with a desire that we’ve had the last month,” King said. “We cannot turn the ball over at all. No turnovers and no holding call. We have to want it more than they do.”

As to when ACCS will be leaving Natchez for Jackson, King said, “The weather may dictate when and what time we leave.” He added that he is hoping for a big contingent of fans to make the trip to Jackson Academy to cheer on the Rebels.

“We’re honored to represent the beautiful city of Natchez and we hope to have a lot of fans rooting us on. We’re underdogs,” King said.

VIDALIA — The Vidalia Board of Aldermen will move ahead with a nearly $595,000 natural gas line extension that... read more