Officers find cache of weapons near scene of shootings 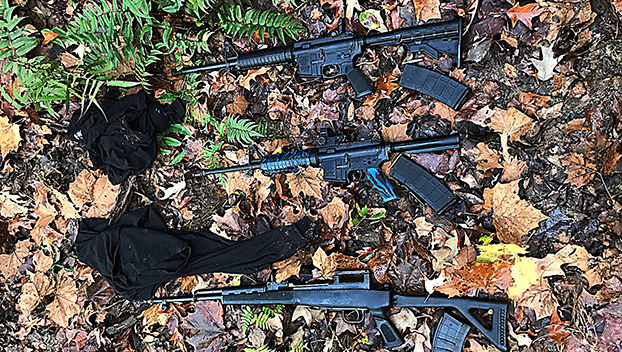 NATCHEZ — Natchez police and Adams County Sheriff’s Office deputies said they uncovered a cache of weapons stashed in the vicinity of West Stiers Lane on Monday night shortly after a shooting killed a man at a residence at 581 West Stiers Lane.

The weapons were recovered, Adams County Sheriff Travis Patten said, after someone provided a tip that the weapons could be found at a nearby location to the shooting scene.

Meanwhile, authorities said they are investigating the Monday night shooting that killed Don Owens, 29, on West Stiers Lane as a possible murder and Adams County Coroner James Lee said Owens was killed by a shot to the back.

It is not clear, however, authorities said, if any of the four rifles recovered Monday night were used in Monday’s shooting or an early Saturday morning shooting that killed Makailuis L. Johnson and injured another man on East Stiers Lane.

Patten said investigators have processed the guns, one of which had been reported stolen from the Sports Center in Natchez, and sent the weapons to the Mississippi Crime Lab in Jackson.

Patten said he hopes the crime lab can process the weapons in a timely enough manner to help determine if the weapons have been used in recent crimes.

The crime lab, Patten said, has a backlog of cases, including several guns from Adams County that have been at the crime lab for more than a year and still have not been processed.

Patten said having evidence processed and returned could make or break a case.

“We have guns up there for a while and can’t make an arrest without evidence to tie the weapons to a crime,” Patten said, noting the crime lab has been understaffed and underfunded for years, backing up cases throughout the state. “We need people to start calling their legislators to get them to do something to speed up the lab.”

Patten also encouraged people to come forward with any information they might have on cases.

“We have enough people being a part of the problem, so we are calling forth those who wish to be a part of the solution,” Patten said.

Natchez Police Chief Walter Armstrong, who is heading up the investigation, said investigators are following up on leads and questioning people in Monday’s fatal shooting.

“We quickly learned last night the individual was armed and fired his weapon,” Armstrong said. “Things will become clear later on that may not be clear now.”

Armstrong said investigators also are still following up on leads in the Saturday murder that killed Johnson on East Stiers Lane.

No suspects have been identified in either the Saturday morning murder or Monday shooting, Armstrong said.

If Monday’s shooting is ruled a murder, and not an accidental, self defense or other type of shooting, it will be the city’s 12th murder this year.

Adams County, outside of the city limits has recorded two murders this year.