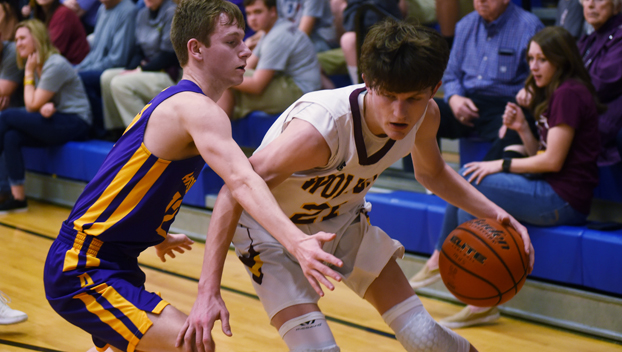 VIDALIA — The Monterey High School Wolves entered the 2019 LHSAA Class B Playoffs as winners of 20 games. The Anacoco High School Indians, on the other hand, somehow got to the postseason despite losing 24 games.

And No. 14 seed Monterey got off to a good start, but then went into a drought over the next two quarters and No. 19 seed Anacoco took advantage as the Indians stunned the Wolves 59-52 Friday night in a bi-district round game played at the Vidalia High School gymnasium.

“I thought they shot the ball extremely well. They made 10 3s,” Monterey head coach Eric Richard said. “We started out shooting well and didn’t shoot it well in the second half.”

Monterey had one last opportunity to retake the lead late in the ball game.

“It was 54-52 with 40 seconds left. We had the ball and we had a shot to tie or take the lead. We missed and they made their free throws,” Richard said. “Both teams played hard. It was a good high school basketball game.”

Anacoco would end up outscoring Monterey 21-19 in the fourth quarter. The Indians were led by Landry Allgood with 18 points, Zack Benevage with 16 points, and Noah Carroll with 13 points.

The Wolves got a game-high 25 points from Hunter Lipsey and 19 points from Trey Boyd, but only two of their teammates found the scoring column.

PORT ALLEN — Port Allen High School nearly squandered a double-digit lead in the second half, but the No. 7 seed Pelicans held on for a 54-45 win over the No. 26 seed Vidalia High School Vikings Friday night in the bi-district round of the 2019 LHSAA Class 2A Playoffs.

Port Allen (21-12) led Vidalia 17-9 after one quarter of play and appeared well on its way to a blowout win after taking a 25-13 lead into halftime.

“We were down by 12 at halftime and by as many as 15 in the third quarter and then we got it down to three several times,” Vikings head coach Robert Sanders said. “Then we got hit by cramps. We hadn’t had that problem all year.”

Jaquan Wilson, who led the Vikings with 18 points and was, as Sanders put it, their “big spark plug” during the third-quarter comeback, went out in the fourth when he started cramping up. He tried to get back in the game, but the cramps would not allow that.

Malachi Matthews, who was Vidalia’s rim protector despite scoring just five points, went out in the third quarter with the same issue. Sanders said he went back in several times.

Vidalia outscored Port Allen 18-10 in the third quarter to make it a 35-31 game, but the Pelicans responded with a 19-14 advantage in the fourth quarter.

“We weren’t able to keep that momentum going. Foul trouble on RayJay (Ransom) hurt us. He was hit with several charging fouls,” Sanders said.

Ransom as well as DeMikal McCoy finished with seven points apiece for the Vikings. Jalen Knox and Julian Jarvis led the Pelicans with 11 points each.

LAKE ARTHUR, La. — The No. 6 seed Lake Arthur High School Tigers defeated the No. 27 seed Ferriday High School Trojans 74-59 Friday night in the bi-district round of the 2019 LHSAA Class 2A Playoffs.

Lake Arthur (26-5) scored at will in the first quarter while Ferriday struggled to keep up with the home team. By the time the quarter was over, the Tigers had a 23-13 lead. When halftime arrived, they led the Trojans 37-24.

Ferriday tried to get back in the game in the third quarter, but only managed to knock two points off Lake Arthur’s lead when it was over and trailed 52-41.

Montrieze Sandage led the Trojans with 25 points and Jalyric Brooks finished with 23 points.

DELHI, La. — The No. 4 seed Delhi High School Bears defeated the No. 29 seed Delta Charter School Bears 81-34 Friday night in the bi-district round of the 2019 LHSAA Class 1A Playoffs.

Delhi (26-7) took its first double-figure lead in the first quarter and led Delta Charter 21-8 at the end of the quarter. The Bears would not let up over the next two quarters as they outscored the Storm 21-9 in the second quarter and 33-10 in the third quarter for an insurmountable 75-27 lead.

SICILY ISLAND — Homer High School took advantage of a cold-shooting second quarter by Sicily Island High School to pull off a stunning 64-56 win Friday night in the bi-district round of the 2019 LHSAA Class 1A Playoffs.

No. 18 seed Homer (14-16) and No. 15 seed Sicily Island were tied 6-6 at the end of the first quarter before the Tigers went cold from the field in the second quarter and scored just four points. The Pelicans, on the other hand, put up 15 points to take a 21-10 halftime lead.

Sicily Island found its rhythm in the third quarter and cut the lead down to five points, 40-35, at the end of the quarter. Yet the Tigers could not keep the momentum going in the fourth quarter and were outscored by the Pelicans 24-21.

Jay Miller led the Pelicans with 19 points and Detravione Knowles added 10 points. Tyreke Tolliver led the Tigers with a game-high 25 points and Keonte Dunbar had 16 points.

LEARNED — The Wilkinson County Christian Academy Rams saw their season come to an end last Wednesday night in the boys’ quarterfinals of the 2019 MAIS Class A State Tournament at Rebul Academy.

West Memphis Christian School, the North No. 1 seed, simply had too much talent for WCCA to hang with as the Black Knights rolled to a 71-43 win over the South No. 4 seed Rams.

D’mario Weathersby led the Rams with 13 points while R.J. Fisher nearly had a double-double as he finished with nine points and 11 rebounds. But they could not overcome a poor shooting performance – 16-for-51 (31%) from the field, including 5-for-21 from three-point range – as well as 32 turnovers.

West Memphis Christian jumped out to a 22-7 lead after one quarter of play, but WCCA responded with a 14-13 advantage in the second quarter to go into halftime down 35-21. But any thoughts of a second-half comeback by WCCA were put to a halt by the Black Knights as they outscored the Rams 28-7 for a 63-28 lead.

Past time to rein in crime in Mississippi