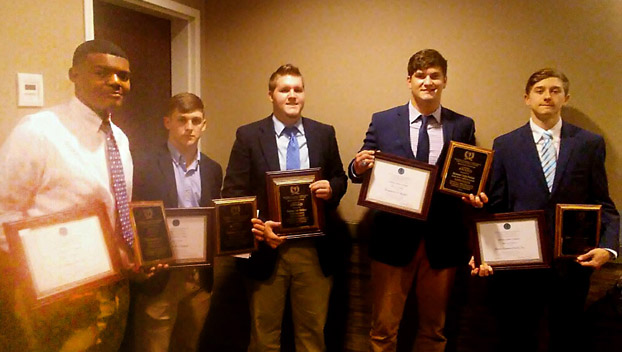 Approximately 100 people filled the banquet room at the Hotel Vue to see six area football players receive scholarship funds after being nominated by their respective coaches.

Each coach took a turn at the podium and introduced his players to the guests on hand.

Adams County Christian School Coach David King shared the story of how his nominee Dawson Parker rallied the entire team as well as all the coaches to win the Mississippi Association of Independent Schools AAA state championship.

With emotion, King said that after a rough season, ACCS was faced with a difficult playoff bracket and it was Parker who told the team they could win the state championship, and they did.

“Lance does everything with no questions asked,” Darboone said.

Delta Charter coach Blake Leyland described his nominee Trey Poole as the hardest working player that he has ever coached in his 14 years of coaching.

“He led his teams by example,” Leyland said.

Poole has accepted an academic scholarship to Millsaps College in Jackson.

Ferriday coach Stanley Smith said his player Larry Scott “strives to excel in the classroom and the football field and played literally every position on the field during his career.”

Scott has accepted a football scholarship to Delta State.

Natchez High coach Roy Rigsby shared with the guests how Paul Hargrave Jr. was at his house constantly watching a lot of film and sharing a lot of meals with him. Hargrave played quarterback and also pitches. Hargrave will attend East Central in Decatur to play quarterback.

As one of the leaders of the team, Nations has accumulated a GPA of 4.0 for four years to go along with 33 hours of college credits. Nations will attend McNeese State on an academic scholarship.

A college group headed by Theresa Busby, Ph.D., takes all six resume’s with no names attached and no school affiliation and comes up with the winner, organizers said.

This year’s first-place winner is Lance Gaude Jr. based on athleticism, school, community service and the overall balance.

“The night was really exciting,” Gaude said. “I’m grateful I got nominated by my coach and counselor. Reading through the pamphlet, I had some tough competition.  All the hard work for four years really paid off my junior and senior year.”

Freddie Sandel presented the contribution to amateur football award to Walt Brown, who served as Cathedral High School’s play-by-play announcer for 24 years.  Brown thanked his wife for allowing him to do the games and travel.

“She does the driving,” Brown said. “Hope to see y’all in the fall. Go Green Wave.”

Joe Willis presented Ronnie Harper with the Distinguished American Award.  Harper has served as the district attorney for the sixth judicial district in Adams County since 1996.

“I appreciate it greatly and want to congratulate all of the scholarship winners,” Harper said.

By TIM GUERCIO The Natchez Democrat NATCHEZ — Registration is underway through March 16 in Natchez for Dixie Youth Baseball.... read more