Learning from 2011: Local officials know better what to expect from flooding 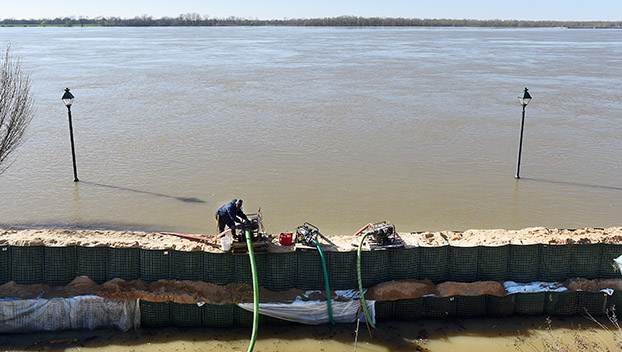 A worker tends to the sump pumps earlier this week on top a temporary levee built on the north side of Magnolia Bluff Casino. Floodwaters from the Mississippi River continue to rise as officials keep a close eye on the predicted crest — which is four feet below the crest in 2011. (Ben Hillyer / The Natchez Democrat)

The Mississippi River is projected to crest in Natchez at 58 feet on Monday, which would be the third highest ever-recorded crest here.

While 58 feet is just shy of 4 feet below the highest level ever for the river at Natchez, officials who are keeping an eye on the river say the 61.95 foot 2011 flood experience has helped them keep this year’s flood levels in perspective.

“People back in 2011 tended to panic more,” said Barry Maxwell Fifth Louisiana Levee District Board member. “There were people moving stuff out to their storage buildings because they had never experienced the river that high.”

For Gail Netterville who lives on Old River, the 2011 flood was a bad experience, and she had to move all of her furniture out on a pontoon boat.

Netterville said she is keeping her eye on the river daily this year and she has less than a foot before the river comes through her doors.

The river level was 57.53 feet at Natchez on Friday afternoon and Netterville said she does not plan to move any furniture out this year.

“I hope we will be OK,” Netterville said. “If they don’t change it (the crest forecast) we will be fine. If these boats would stay off the river it would be even better.”

Netterville said powerboats continue to travel a stretch of the river and wakes push water closer to the doors of her raised house on the Old River.

Netterville said her electricity was turned off on Feb. 26 and she and her fiancé have been living off generator power ever since.

“We have to run the generator,” Netterville said, “run the gas up and down the levee and, ugh, ugh. I’m tired of fighting this river, getting too old for it.”

Netterville said she plans to move out of the house she has lived in for 10 years after this year’s flood experience.

Having lived through 2011’s 61.95-foot flood, Netterville said, did not give her any experience that has made living through this year’s experience easier.

Jason Trichell, superintendent of operations for the Fifth Louisiana Levee District, said his organization, however, did learn many lessons during the 2011 flood that have helped alleviate potential problems with this year’s high water.

Most notably, Trichell said, is that in 2011 the levee district, which stretches from the Arkansas state line to the Old River Station, had to place 600,000 to 700,000 sandbags. This year, Trichell said, the district has only placed approximately 500 sandbags.

The reason for the decreased need for sandbags, Trichell said, is because the U.S. Army Corps of Engineers took steps after 2011 to help alleviate seepage and sand boils on the levees. Sand boils are “water volcanoes” that pop up in the water along the levees that are indications of internal erosion in the levees.

“The biggest difference between now and then (2011),” Trichell said, “is the Corps realized some of our troubled areas, and they’ve come back in and put in a lot of … relief wells.”

Trichell said the Corps has built more than 300 relief wells in the fifth district levee board jurisdiction, which helps reduce trouble areas.

Relief wells, Trichell said, consist of a metal pipe extending down into the aquifer to give overflow water a release along drainage ditches.

Nonetheless, officials said, levee workers for the levee board, the Corps of Engineers, and Concordia Parish monitor the levees on a daily basis looking for sand boils, building cofferdams and monitoring seepage.

Also since 2011, several levee enlargement programs have increased the average height of the district’s levees 4 to 5 feet, Trichell said.

Guy Murray, director of Homeland Security and Emergency Preparedness of Concordia Parish, said 2011 was much worse than this year’s flooding.

“The 2011 flood was something nobody of this time had seen — nobody had seen that so we all tried to work together,” Murray said, adding lessons were learned during the 2011 experience. “We were successful in 2011, but we just remembered what we did well. We remembered what we thought we could do better to feel more comfortable. We are nowhere near where we were in 2011.”

This year, Murray said, multiple agencies are in constant communication.

“We are all staying in communication, the parish, the town, the levee board, the Corps, the National Weather Service,” Murray said. “They send out daily updates on what they are seeing and it is good communication between everybody.”

Meanwhile, Murray said he is keeping an eye on the big picture.

“The Town of Vidalia and the parish as a whole are dealing with seepage everywhere,” Murray said. “There’s some sinkholes that have started to show up in several areas that I know of in Vidalia especially. The levee board’s got their own problems with sand boils that they are monitoring.”

Vidalia Mayor Buz Craft said he, like others in the town, started moving things out of his house during the 2011 flood.

“I moved all of my furniture to higher ground in Mississippi,” Craft said.

Looking back, Craft said many decisions by residents and local leaders were made because no one had experience a flood the size of what was predicted. Given the lessons of 2011, Craft said he doesn’t have plans to move his furniture from his house this year.

The flood in 2011, Craft said, provided town officials with valuable information that they now can use to better manage the situation.

“Now we know what it takes to respond to the flood. We learned what level the river has to be to start causing issues,” Craft said. “We know what the target points are and when to pull the triggers.”

Craft said knowing when to act will also help the town be better stewards of taxpayer money.

Craft said he had heard that more than $2 million was spent in 2011 to protect the Vidalia Riverfront. He was not in the mayor’s office at that time. The town will make sure it protects its assets, including the businesses on the riverfront, but will wait until the river rises to a level necessary to begin to start installing Hesco baskets which can create temporary levees.

At 58 feet, the river will not be at that level, Craft said. If the National Weather Service raises its forecast officials will begin to look at the next actions to take.

“Until it gets to the point where we have to act, we are not going to spend the money,” Craft said.

“It is kind of going as well as could be expected,” Trichell said. “We’ve been doing … this long enough, we kind of know when the river gets to a certain level we’re going to get sand boils pop up in the same places so we kind of know where to check and what to do.”

Trichell said the levee board crew is experienced and has been monitoring the levees daily.

“Up to now everything is still going our way and we don’t foresee any issues,” Trichell said. “We’ll just continue to monitor and keep a close eye on everything and we’ve got people patrolling — the Corps is doing their patrols. Our guys are doing their patrols — in between the two of them they pass by at least twice a day on it.”

Monday’s 58-foot crest should not be a problem for most Adams County residents, officials said.

Adams County Emergency Management Director Robert Bradford Sr. said residents around Anna’s Bottom, Bourke Road and Carthage Point Road could have water on their property if the crest is higher than 61 feet, but that is not currently in the projections.

Those residents also know how to respond when waters rise, Bradford said — especially after having endured high water in 2011.

“As far as any local areas with homes flooding, there aren’t many,” Bradford said. “These families in those areas are going through their normal process and preparations when the river rises.”

District 1 Supervisor Mike Lazarus said more than 100 sandbags were given out at one time in recent weeks at the Natchez-Adams County Port facility to a family on Bourke Road who’ve experienced floods before.

The road itself had been rebuilt since eight years ago, so it sits higher by a couple of feet, Lazarus said.

“The main thing to remember is to be prepared,” Lazarus said. “We have sandbags ready for people who need it. … A lot of the preparations we’ve made because of the things that happened in 2011 are still here.”

Eight years ago, JM Jones Lumber Company built a massive levee around its facility which sits on the river just south of the Mississippi River bridge, said owner Lee Jones, which has done well to hold back the river water since.

“The U.S. Corp of Engineers predicted the river would crest at 65 feet (in 2011) so we built a monster of a levee. …” he said. “So our problem now is not the levee itself, because it’s huge.”

Bradford said sandbags can be requested and filled as needed by calling 601-442-7021 and can be picked up at the Natchez-Adams County Port.

We will get through this

Murray agrees that this year’s experience has gone well so far.

“We really haven’t had to do anything this year,” Murray said. “The river has not gotten high enough or projected to be high enough for us to start doing anything like what we did in 2011.”

If the projections hold Murray said he feels good about the next several days.

“The projection is still 58,” Murray said. “The projection has changed to March 11. According to the forecast that came out today, it will be there — hold at 58 feet — for three days maybe four and then it is going to start coming out about a foot a day on average.”

In the meantime, Trichell asks people not to drive on the levees.

“Whenever the river gets to 53 feet at the Natchez gage,” Trichell said, “we request all traffic stay off the levee. The levees are private roads anyway unless specified by parish rules but especially whenever the river is high. We don’t want any traffic on that — only authorized vehicles are allowed when the river is above 53 feet.”