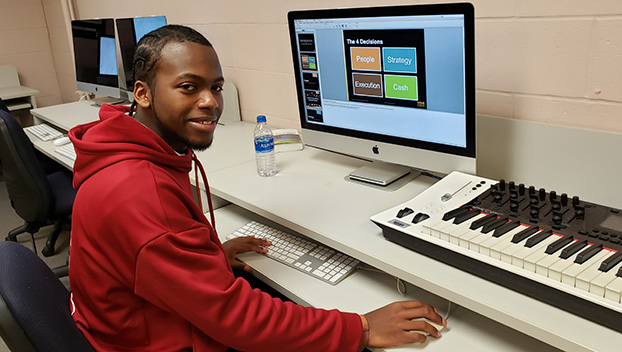 NATCHEZ — Khallil Jenkins, a junior at Natchez High School, said the judges’ attention locked on him soon after he stood up to speak.

“I had three judges,” he said, “and throughout the whole presentation, none of them looked down to mark on their papers. Not once. … I felt like I was preaching.”

With 10 to 15 slides and his speaking skills, Jenkins said he spoke to his peers during a 3- to 5-minute presentation about how they can set a good example for others.

“I had a couple of days before the competition to prepare,” Jenkins said. “We went to Vicksburg on a Tuesday and I got my topic the Friday before.”

As soon as he had his topic, Jenkins said he started his research and came up with a metaphor for a leadership role using the four tires on a car.

“‘Modeling the way’ is a leadership position,” he said, “and to be a leader you have to have … values, trust, commitment and credibility. … They’re like the four tires on a car. You have to have all four of them, or else the car is not going anywhere.”

Jenkins said his public speaking ability was no secret to him before the competition.

“I don’t mean to sound cocky, but … people have always told me one day I would be a preacher. I don’t think preaching is for me because I’m not as intuitive as I probably should be. But I am a talker and love to debate and evaluate certain things.”

Jenkins said he also enjoys playing the drums, keyboard, baritone and trombone, among his other talents, as well as enjoying making videos. Jenkins also is the drum major for the Natchez High School band.

When he graduates, Jenkins said he plans to study business management and music at Jackson State University.

Jenkins performance with the Technology Student Association made him eligible to participate in a statewide competition later this month, he said.

Jenkins is the son of Nikki Jenkins and the grandson of Estelle Fleming.

VIDALIA — Even though one could hear the sound of the waves lapping, Monday afternoon was no day at... read more